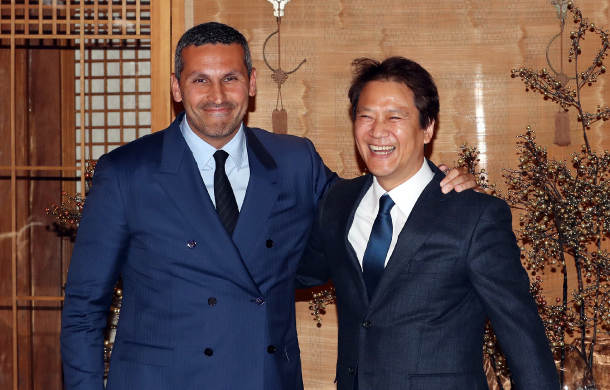 With their arms around each other, Khaldoon Al Mubarak, left, chairman of the Executive Affairs Authority of Abu Dhabi, and Im Jong-seok, Korea’s presidential chief of staff, walk out of the Korea Furniture Museum, where they had lunch and talks in Seongbuk-dong, central Seoul, on Tuesday. [YONHAP]

Khaldoon Al Mubarak, chairman of the Executive Affairs Authority of Abu Dhabi, an influential adviser to the royal family of the UAE, visited Korea on Monday. He had a luncheon with Presidential Chief of Staff Im Jong-seok at the Korea Furniture Museum and then paid a visit to President Moon Jae-in at the Blue House on Tuesday.

“Moon assured Khaldoon of his strong will to advance the strategic partnership between the two countries based on mutual trust,” Park Soo-hyun, presidential spokesman, said.

The two sides decided to create a new communication channel between foreign and defense ministries of the two countries. “The so-called two-plus-two dialogue is a channel normally used between allies,” a senior Blue House official said. “Korea operates a foreign and defense minister-level dialogue with the United States and Australia. Today, the two sides discussed on what level the dialogue should start, and Korea wants to start with a vice-minister-level channel.”

Al Mubarak’s visit took place amid rumors of highly strained ties between Seoul and Abu Dhabi. Politicians and government officials have said the Moon administration attempted to change a secret military pact Korea signed in 2009 as part of a deal to win a $18.6 billion nuclear plant project in the UAE. They suspect that Moon sent Im to the UAE in December as special envoy for a meeting with Sheikh Mohammed bin Zayed bin Sultan Al Nahyan, the crown prince of Abu Dhabi, and Al Mubarak, in order to calm the diplomatic row.

Although the Blue House never confirmed that there was a diplomatic row, a senior presidential official hinted that the two sides discussed the issue. “Khaldoon compared the two countries’ relations to a marriage,” the source said. “He said there are good times but also bad times in a marriage, but a marriage is also about overcoming challenges and finding harmony.”

“I want to stress that over 90 percent of the discussion was about the future,” the official added.

According to the source, defense cooperation and energy were part of Im and Al Mubarak’s talks. Their meeting lasted about three hours and 30 minutes and they briefly addressed pool reporters.

“Over the past month, there were many media reports, and I hope this serves as an opportunity for the Korean people to revisit the importance of friendship between Korea and the UAE,” Im said. “It is the only strategic partnership that we have with a Middle Eastern country, and we agreed to expand it more comprehensively.”

Im also said he and Al Mubarak agreed to visit each other once a year to advance the relations.

Al Mubarak also expressed his hopes to bolster bilateral ties. “The United Arab Emirates and Korea have a very special, long-term, historic relationship. It is a relationship we care very much about and it is a relationship we are working together always to strengthen and to build more ties in more sectors,” he said. “We have a very unique relationship that goes into many areas and many sectors, that covers all aspects of the government, private and public sectors.”

According to the Blue House, Al Mubarak delivered a letter from the UAE crown prince to Moon, inviting Moon to visit. The Blue House said it is considering a trip in the coming months.