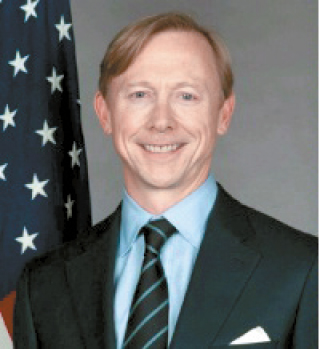 Brian Hook, senior policy adviser to U.S. Secretary of State Rex Tillerson, said on the inter-Korean talks Tuesday, “It’s a start,” leaving open the possibility they could lead to something “meaningful.”

“It could be meaningful, it could be important, it could also be just a meeting about the Olympics and nothing else happens,” said Hook in a telephone briefing earlier Tuesday with reporters on U.S. policy for the Asia region. He was asked about the high-level meeting between the two Koreas taking place the same day to discuss the PyeongChang Winter Games next month.

He went on to recall President Donald Trump’s remarks at Camp David in Maryland over the weekend. Hook added that Trump “hopes a positive development results from talks between the North and the South, and the way we look at it is that it’s a start. And we believe that if something can come out of those talks, that will be a good thing, but we expect that it’s going to be mostly focused around the Olympics.”

Hook previously served as an assistant secretary of state for international organizations and senior adviser to the U.S. ambassador to the United Nations.

“As President Moon [Jae-in] has said, the improvement of relations between North and South Korea cannot advance separately from resolving North Korea’s nuclear program, so we remain focused on our global pressure campaign,” said Hook. “That campaign is designed to bring [North Korean leader] Kim Jong-un to the table for meaningful negotiations.”

He underscored that U.S. policy remains the “complete, verifiable, irreversible denuclearization of the Korean Peninsula,” adding that Washington is in “close contact” with South Korea on a “unified response.”

He said President Trump “believes that if we didn’t have the pressure campaign, [North and South Korea] wouldn’t be talking at all right now. He’s pleased that they are.”

Hook added, “When Secretary Tillerson came into office, the president identified North Korea as his number one security priority,” which led to “a campaign of gradual and escalating pressure.”

Hook said Tillerson’s “low-profile and patient diplomacy, together with our allies and partners around the world” has been successful “in increasing pressuring on the Democratic People’s Republic of Korea to new and unprecedented levels.”

Tillerson in most bilateral talks asks countries to sever or limit diplomatic ties, to expel and deny visas to guest workers from North Korea and to make sure their financial system is not being exploited by the North Koreans, Hook pointed out.

“Working with countries in the Indo-Pacific region is a central aspect of this administration’s foreign policy,” said Hook, “and we are increasing our focus to deepen our alliances in the region, restraining North Korea’s nuclear and missile programs, promoting fair and reciprocal trade and also protecting the free flow of commerce in the region and throughout the world.”

During a visit to Asia in November, Trump described “a free and open Indo-Pacific” concept rather than the traditionally used term “Asia-Pacific,” leading to speculation that his policy was partly about containing China.

Hook described Washington as focused on the Indo-Pacific “because we believe it to be the most consequential part of the globe this century,” with a population of some 3 billion people.

“We have five U.S. treaty allies in the region, and it’s the focal point of the world’s energy and trade routes and that makes it vital to U.S. national security,” Hook said. “The region has the largest democracy in India and the largest Muslim-majority country in Indonesia. Five of our top ten trading partners are in this region: Japan, the Republic of Korea, India, Taiwan and China.”

He continued, “It’s in our national interest to work with all of these allies and partners to ensure that the Indo-Pacific remains a place of peace, stability and growing stability. It cannot become a region of disorder and conflict.”