Chun ramps up training after a winless season

Chun ramps up training after a winless season 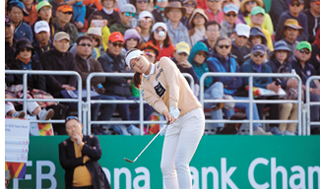 After Hite, a major Korean beer brand, failed to extend its sponsorship of Chun In-gee in 2016, the LPGA golfer spent the next season competing without a label on her cap.

Although Chun, ranked No. 5 in women’s golf, had no problems financially, it was a matter of pride for a top golfer to play with a primary sponsor. Last December, Chun finally found a sponsor in KB Financial Group.

“The main sponsor is an important decision, like marriage,” Chun said. “I found a sponsor that could come along with me on this long journey, and I am excited about it. I’ll get off to a strong start.”

Chun is now in the United States for preseason training, and she is more determined than anyone on the LPGA Tour to add another victory to her list of achievements.


Looking at her numbers from last season, Chun didn’t perform too poorly, but looking at her results, it was not a good season. She failed to win any tournaments, having already won two majors earlier in her career. The 23-year-old golfer finished 2017 with five runner-up finishes.

Numbers-wise, Chun finished third in average scores, with 69.41, and 11th on the money list, earning about $1.25 million. Throughout the season, she came close to victory a number of times but always came up short. Chun would play well on the final day, only to be bested by another golfer.

Based on the LPGA Tour’s statistics for the 2017 season, the field has gotten a lot more competitive, as more players had average scores in the 60s. In 2016, Chun not only won the Vare Trophy, but she also played most rounds with a score in the 60s, at 37. 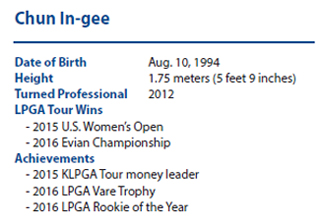 The following year, she improved her record to 40 rounds but finished sixth. An increase in the number of tournaments might have been one reason for the drop, though it might be better explained by the improvement of tour players.

In 2017 season, the LPGA Tour had a record 12 golfers with an average score in the 60s. This is a significant increase from 2016, when there were only five. Looking at green in regulation percentage and average score, Chun demonstrated improvement in 2017 compared to 2016. Last year, she finished fourth in greens in regulation percentage at 77.03, improving from 72.45 in 2016.

But she fell behind in putting. Chun’s putt per greens in regulation was 1.77, 0.03 more than the previous year. Specially, Chun’s putting average worsened, from 29.07 to 29.61, and because of this, there were many points last season where Chun missed short putts after great iron shots.

In addition to putting, Chun’s other weakness was distance compared to other top-ranked players. Not all long hitters play well, but longer hitters definitely have more benefits in golf, as they can use shorter clubs for their second shot, giving them a higher possibility of hitting their shot closer to the pin. Chun’s average driving distance in 2017 was 252.18 yards, ranking 79th.

Chun is fully aware of her weaknesses, and she plans to focus on gaining distance this offseason. Since she has fully recovered from her injury in 2016 and is able to perform a full swing, her distance will likely increase. Chun has the physique to be a long hitter.

Now that she is starting her season with a new sponsor and new state of mind, Chun says she has positive expectations for the coming season. Out of all the events, the ANA Inspiration, the first major of the season, is the one she wants to win the most.