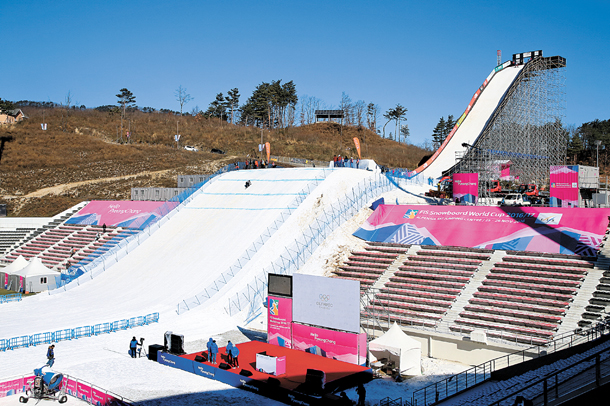 The empty arena at the Alpensia Ski Jumping Centre in Pyeongchang, Gangwon during an Olympics test event on Nov. 11, 2016. As many as 88 percent of ticket holders failed to show up. [JOONGANG PHOTO]


Sluggish ticket sales are not the only problem the 2018 PyeongChang Olympics faces, as rising concerns about no-shows by viewers and volunteers are also surfacing.

Though 64 percent of tickets for the Olympics have been sold as of Jan. 3, the majority were bought by local governments, banks and corporations, who bought them in bulk. Because the tickets weren’t purchased by individual buyers, the actual attendance may be lower than expected.

The Seoul Metropolitan Government and several banks have each bought 10 million won ($9,360) worth of tickets, while a number of large companies are also picking up group tickets. The tickets will be distributed as free tickets to economically disadvantaged people at welfare centers so that the events can be more inclusive and accessible.

The problem, however, is that attendance by these people is not guaranteed as they may not be able to leave their jobs to watch the Games, causing concerns that there may be a considerable number of empty seats.

Though they can receive entry tickets for free, they have to take into consideration the total cost of transportation and accommodation, which is not likely to be cheap. Visitors will on average have to pay 150,000 won per night for housing, while travel expenses may cost up to 27,600 won, if they are unable to receive discounts for the KTX train running from Seoul to Gangneung, Gangwon.

Even if tickets for the Games sell out, there is still a high possibility that athletes will face an empty arena.

Nordic events, including the biathlon, cross-country skiing and ski jumping, are particularly vulnerable as they are the least popular among Koreans. At one Olympic test event held in November in Pyeongchang during the Big Air World Cups, 88 percent of the people who purchased a ticket did not show up. NBC Sports, which is responsible for programming and broadcasting the event, expressed concerns over the low attendance at the test event and speculated that the actual events might also struggle.

The PyeongChang Organizing Committee for the 2018 Olympic and Paralympic Winter Games (Pocog) announced that it is planning on sending a cheer team from Gangwon, along with Olympic volunteers and members of the Olympic committee, if there is a considerable number of no-shows.

However, some people are questioning this move as it might interfere with the spirit of the Games.

“During the 2014 Incheon Asia Games and the 2011 IAAF World Championships in Daegu, the organizing committees rallied residents from the region,” explained Chung Hee-joon, professor from the physical education department at Dong-A University in Busan. “But, these people ruined the sportive atmosphere of the events because they were not interested in the games and were instead doing other things.”

As a solution, Chung encouraged President Moon Jae-in and K-pop idols to actively promote and participate in the events to influence others to go. He also believes that North Korea’s participation in the Games will raise new interest in them.

The Seoul government and a number of banks have organized a bus service to and from the Olympics and are offering discounts on the KTX train service between Seoul and Gangneung in an attempt to further encourage people to go.

Local governments and organizations providing free entry tickets to the economically disadvantaged are also developing plans to re-sell tickets for people who cancel their reservations. However, they will have to consult with the International Olympic Committee (IOC) on this matter.

“With the [Olympic] opening ceremony fast approaching,” said Jeong Yoon-soo, a former sports editor for online news agency OhmyNews, “there is a limit to how much the nation can pressure its citizens to participate in the Olympics, just because it’s being hosted in their country.

“The government should instead spread awareness about the danger of challenging oneself to become a winter sports athlete and play on that charming aspect to get people to willingly travel and see the Games,” emphasized Jeong.

No-shows among the audience may not be the only problem. Volunteer dropout rates are also an increasing concern due to limited support from the Olympic committee. Nearly 25,000 volunteers have signed up to help out with the Games for free, but some find the cost of transportation, even with discounts, and accommodation expenses burdensome, while others complained about their thin uniforms being insufficient to keep them warm during the events.

The Paralympics face a greater risk of volunteer no-shows, as it takes place after students go back to school, from March 9 to 18. Though the committee has requested schools excuse absent students who are volunteering for the event, they cannot force them to do so.

Many hotels, motels and restaurants in Pyeongchang are also facing a flood of sudden cancellations in reservations, increasing the likelihood that people aren’t going to show up. According to the Hyundai Research Institute, restaurants, express buses, hair salons, hospitals and small theatre venues as a whole lost 4.5 trillion won due to no-shows in 2017. It seems PyeongChang may contribute to those numbers in 2018.