MMCA introduces what’s ahead in 2018

MMCA introduces what’s ahead in 2018 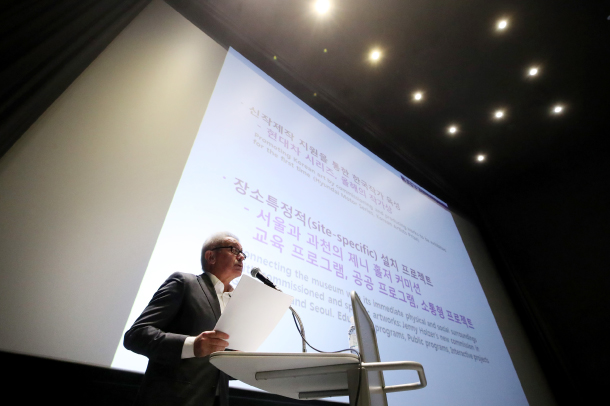 Now facing the end of his three-year term as the first-ever foreign director of Korea’s National Museum of Modern and Contemporary Art (MMCA) in December, Bartomeu Mari said on Wednesday he’d like to serve a second term if allowed. During a press briefing at MMCA Seoul, located near Gyeongbok Palace in central Seoul, he introduced the museum’s 2018 exhibition lineup.

Asked about serving consecutive terms, he said, “I personally like to finish what I have begun, so yes. In the life of a museum, three years is nearly nothing. Museum works are long-term projects... We are halfway through a number of transformations, none of which are radical, just very normal, but it takes a lot of energy.”

In past interview with the Korea JoongAng Daily and at briefings, Mari has repeatedly emphasized the importance of doing research and exhibitions that view Korean art in the context of Asian and global art history and publishing high-quality English-language catalogues and books about them.

In accordance with the vision, the museum will hold a large-scale group exhibition of Asian artists at the MMCA Seoul from April to July. It will also co-host a show of Asian contemporary art viewed in the sociopolitical context, based on four-year joint research by curators of the MMCA, Tokyo’s National Museum of Modern Art, the National Gallery Singapore and the Japan Foundation. The show will be held at the three museums through next year, beginning at the Tokyo museum this October.

And a large-scale international photography exhibition titled “Civilization” featuring 100 Korean and foreign artists will be held in October at MMCA’s Gwacheon headquarters in Gyeonggi under the co-curatorship of Mari and famous photography curator William Ewing. The exhibition will tour other countries and an English-language book about the exhibition will be published by the London-based Thames and Hudson.