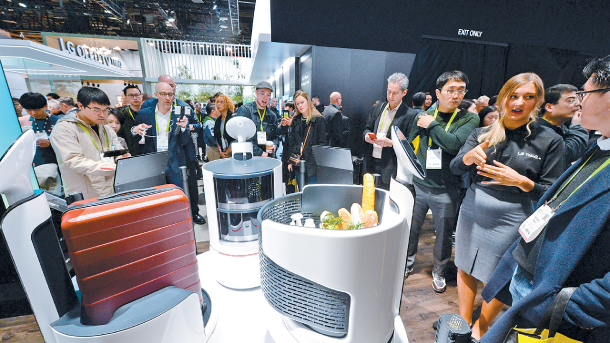 Visitors to LG Electronics’ booth at the Consumer Electronics Show in Las Vegas take a look at the company’s AI concept robots on Tuesday. [LG ELECTRONICS]

LG Electronics made it clear that artificial intelligence will be at the center of its smart home initiative at the Consumer Electronics Show in Las Vegas on Tuesday.

The company announced that it would make all of its smart appliances voice controlled in a press conference.

“Last year, we added Wi-Fi to all of our home appliances,” said David Vanderwaal, LG’s vice president of marketing, during the press conference.

“This year we’re adding LG ThinQ, our AI platform, to all of our appliances.”

“With ThinQ, you won’t have to study instruction manuals anymore,” he noted. “Instead, the products will learn from the users to provide the best services.”

ThinQ will go so far as to tie up with LG’s smart car products, connecting a user’s home and car.

What’s interesting is that ThinQ, the new AI platform, has been integrated with Amazon’s Alexa and Google Assistant, meaning users can use the world’s most dominant smart speakers to manage home appliances ranging from TVs to washing machines and dryers, refrigerators, ovens, air purifiers, air conditioners and robotic vacuums.

“Software can develop better when it’s open rather than closed,” he said, adding that LG is considering forging additional partnerships at home and abroad with various players beyond Amazon and Google.

The Tuesday announcement comes after LG Electronics made its Signature-branded high-end smart appliances compatible with Google Assistant on Google Home in the United States back in May.

A month later, LG pushed its AI efforts further to establish an AI research center under its software center, and the center has since been concentrating on technologies that are essential to developing AI products and services - from voice, video and biometric data recognition to deep learning algorithms.

“The pace of industrial development is so fast that it is almost scary,” Park said.

“We have thrived on manufacturing, but it appears everything will change from now. How to survive it agonizes us.”

On Monday, LG also took the wraps off CLOi - pronounced Kloh-ee - a robot that can figure out the optimal setting for washing clothes and help users find a recipe on an LG refrigerator, as well as a set of concept robots that could be used in hotels, grocery stores and restaurants.