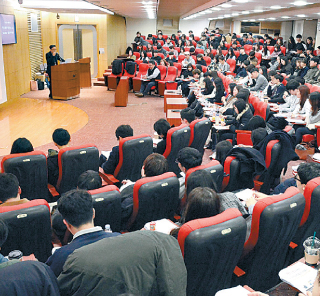 SK Innovation invited a group of university students to its headquarters in Gwanghwamun, central Seoul, on Tuesday to help the company select a public relations agency for its next ad campaign as the oil refiner tries to shore up its image as an outward-facing company.

A number of agencies presented their ideas for SK Innovation’s next ad campaign to about 150 students, who volunteered for the event through the company’s Facebook page.

This is the second year that the company has reached out to local college students to help select a PR agency. Last year, about 40 students participated.

SK Innovation, Korea’s largest oil refiner, has been actively soliciting ideas from the public on a number of projects.

Late last month, the company announced a public campaign to gather ideas on how to utilize resources and assets at the 3,600 gas stations it operates across the country.

The PR agency that university students selected on Tuesday will be in charge of producing SK Innovation’s next advertisement. The company is known for its elaborate video spots that garner more than 10 million views on social media. Past commercials have featured the work of a Korean sketch artist and Turkish oil painter.

Its last video for the company’s “Big Picture of Innovation” campaign featured visualizations of audio frequencies and attracted nearly 15 million views on various platforms including YouTube and Facebook shortly after its release in September.