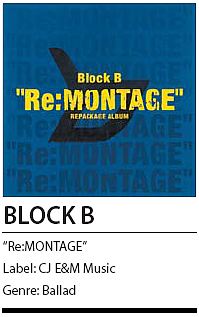 On the repackaged version of their latest album, Block B has returned with a rather calm pop-ballad sound. Showcasing their talent, each of the group’s seven members took part in producing songs for the project.

“Re:MONTAGE” features three new tracks, two of which - “Last Stop” and “Everthin’” - are solo tracks from Jaehyo and U-KWON. “Don’t Leave,” the album’s lead track, is a group effort.

Like a coin with two sides, the new additions to “Montage” add new atmosphere to the mini-album released in November. Added to the high-energy tracks from the original release are three slower, more emotional songs, giving the project a more dynamic sound.

“Don’t Leave” is about how a man who has been neglecting a girl that he loves, so that she ends up leaving him. Park Kyung and ZICO wrote the lyrics, and Park helped compose the track.

Of the eight tracks, six tell the story of separated lovers, while the other two are songs to add to your next party playlist.