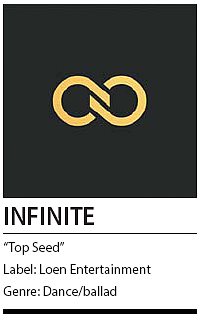 Boy group Infinite begins anew as a six-member group with “Top Seed,” the group’s third album, and first since former member Hoya departed in August 2017. To signal their new start, the album kicks off with “Begin,” and ends with “Begin Again.” There are 12 tracks on the album and the songs range in genre, jumping from R&B to metal, pop ballad to waltz. Covering such a swath of genres nearly made the album a bit rough, but thanks to the boys’ coherent singing, the songs on the album end up going well together.

Three members, Dongwoo, L and Sungjong each provide solo song written by themselves on the album. Among the three, L’s “Last Day” stands out as a slow and sorrow-filled tune, while most of the others are high-energy tracks.

The lead single, “Tell Me,” follows along with the current trends in music, featuring dreamlike electric sounds to create an unusual up-tempo backing track. Fans may like “Begin Again,” as the lyrics seem to be about the group’s fans, thanking them for staying by their side both in times of joy and sorrow.