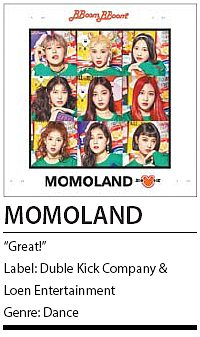 After the success of the their first two mini-albums, “Welcome to MOMOLAND” (2016) and “Freeze!” (2017), Momoland quickly found themselves one of the biggest names in K-pop.

“Great!” is their third mini album and this time around, their bubbly spirit is paired with a maturity that hasn’t been seen on their previous releases.

Their title song “Bboom Bboom!,” produced by Shinsadong Tiger, a well-known hit song maker, will capture listeners’ ears with its charismatic sound. The song tells the tale of a girl determined to charm to her crush and make him fall for her. The catchy lyrics and melody create a fun atmosphere over a funky house vibe. The song’s second verse quickly shifts and has more of a trap hip-hop sound, creating an exciting diversion from the song’s otherwise perky tone.

The group dedicated the song “Fly” to their fans, including the message, “I want to fly higher with you while holding hands.” It’s a refined pop song which listeners will find stuck in their heads after only one listen.