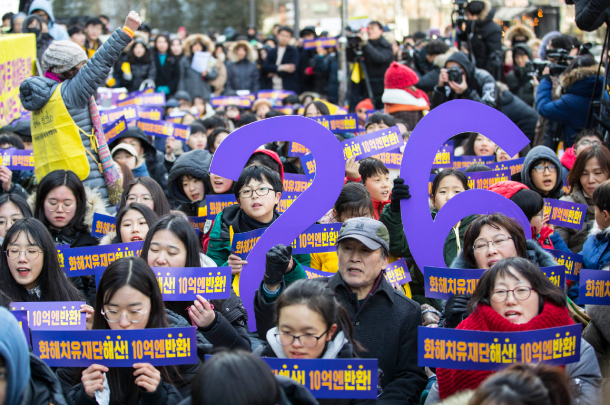 Supporters of the victims of sexual slavery by the Imperial Japanese Army stage a Wednesday rally near the Japanese Embassy in Seoul to urge Japan’s government to issue an official apology for its atrocities. [YONHAP]

Civic groups took to the streets Wednesday to protest the Ministry of Foreign Affairs’ decision not to scrap or renegotiate a 2015 bilateral deal with Tokyo to resolve the issue of wartime sexual slavery.

“The 2015 Korea-Japan agreement has to go straight into the trashcan - it has to be incinerated into obliteration,” declared a representative of the Korean Council for the Women Drafted for Military Sexual Slavery by Japan, one of the civic groups most vocal on the so-called comfort women issue, during their weekly Wednesday rally in front of the Japanese Embassy in central Seoul.

The spokesperson said that the group “cannot accept the attitude that our government will take the measures it can without demanding the Japanese government make legal reparations.”

Earlier Wednesday, President Moon Jae-in said in a New Year’s press conference, “The fact that there was an official agreement between Korea and Japan cannot be denied.”

Moon added, “However, a wrong knot has to be untied.” He said that setting history right can serve to teach societies lessons and prevent recurrence of misdeeds and tragedies, and that it is the duty of a president to address such issues.

The issue of the Imperial Japanese Army’s forced recruitment of young women and girls into sexual slavery before and during World War II has been a thorn in the two countries’ bilateral relations for many years.

“The government will restore the honor and dignity of the victims,” Moon said, and “take actions to heal their emotional wounds” by “listening to the voices of the victims.”

The two countries’ foreign ministries during the Park Geun-hye administration struck a “final and irreversible” deal on Dec. 28, 2015, which included an apology by the Japanese government and a 1 billion yen ($8.94 million) fund for the victims.

Moon has called the deal flawed and in his presidential campaign signaled that it should be scrapped or renegotiated. A Korean Foreign Ministry task force concluded a review of the negotiation process and contents of this deal last month.

Foreign Minister Kang Kyung-wha on Tuesday announced that the Korean government would not scrap or renegotiate the 2015 bilateral, though she underscored that it does not represent a true resolution of the issue. The Korean government also plans to set aside a fund equivalent to the 1 billion yen given by Tokyo for a foundation formed under the 2015 agreement.

Kang added that the government seriously reviewed this decision “taking into consideration that regular diplomatic relations between Korea and Japan have to be restored for the sake of peace and prosperity in Northeast Asia.”

Her remarks indicated that the Korean government was trying to keep in mind the security situation and regional cooperation needed to ensure North Korea’s denuclearization as it made its decision on the comfort women deal. Scrapping or renegotiating the accord could have led to a serious backlash from Japan.

Similarly, Moon said Wednesday that “when the relationship between Korea and Japan moves forward toward the future,” the two countries will be able to “closely cooperate in various substantive areas, including the North Korean nuclear issue.”

Yoon Mi-hyang, the head of the council for sexual slavery victims, said, “Our government expressed that ‘it looks forward to the Japanese government taking voluntary measures,’ but the victims can no longer wait for such passive measures.”

Solidarity for Peace and Reunification of Korea, another civic organization, held a press conference in front of the Foreign Ministry in central Seoul Wednesday also rejecting the government’s decision. It said that recognizing the 2015 deal as an “official agreement” is only “indulging Japan.”

Another civic organization responsible for the management of the Peace Monument, a bronze statue of a girl representing a comfort women victim in front of the Japanese Embassy in Seoul, said in a statement, “What the people want is the complete scrapping of the traitorous deal.”