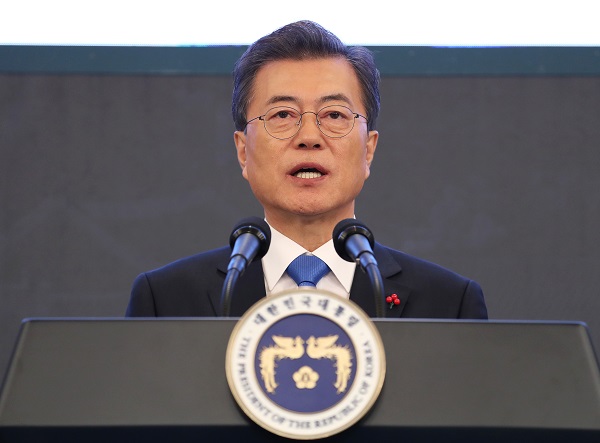 President Moon Jae-in holds his first press conference of 2018 on Wednesday in the Blue House. [YONHAP]

South Korea has no intention of curtailing its sanctions on North Korea unless there is progress in resolving the nuclear crisis, President Moon Jae-in said Wednesday, dismissing speculation that Seoul may lift the punishments as inter-Korean talks resume.

“Although talks with the North started, the North Korean nuclear crisis has not been resolved, so the South will keep pace with the international community on the issue of sanctions,” Moon said during a New Year’s press conference. “I don’t have any intention now to ease sanctions on the North independently from the international sanctions.”

Over the past few years, Seoul has taken several independent measures to respond to Pyongyang’s nuclear and missile brinkmanship and attacks on the South. The May 24 measure, adopted on that date in 2010 after the North’s sinking of the South Korean warship Cheonan, prohibited any new economic exchanges or investments between the two Koreas. The South has also shut down major economic cooperation programs, including Mt. Kumgang tours and the Kaesong Industrial Complex.

Speculation was high that Moon may consider lifting sanctions imposed by his conservative predecessors after the two Koreas resumed dialogue this week. Seoul and Pyongyang wrapped up their first high-level talks since December 2015 on Tuesday, agreeing that the North would participate in the PyeongChang Winter Olympics next month.

“We have to judge them within the framework of the international sanctions imposed by the UN Security Council,” Moon said Wednesday. “It is hard for us to independently lift them.

“At the end of the day, improving ties with the North is inevitably linked to resolving the nuclear crisis. I believe a two-track effort will bring about a virtuous cycle,” Moon said. “What we can do now is induce the North to participate in denuclearization talks while holding dialogues to improve inter-Korean relations.”

He said U.S. President Donald Trump’s strong pressure on the Kim Jong-un regime contributed to the resumption of inter-Korean talks. Moon said Seoul and Washington are in complete agreement in their policies toward the North.

Moon also said he is open to having an inter-Korean summit when conditions are met and an improvement in inter-Korean relations and denuclearization are somewhat guaranteed. “But if the North stages provocations again or refuses to show progress in resolving the nuclear crisis, the international community will impose further sanctions and pressure and the South Korean government will also have to implement a North Korea policy that includes both,” he said.

Before answering questions from the media, Moon also issued a New Year’s address to the nation. “The ultimate goal of our diplomacy and national defense is to prevent a war from recurring on the peninsula,” he said. “I do not want the immediate unification of the Korean Peninsula. My goal is to resolve the North Korean nuclear issue and solidify peace while I am in office,” Moon said.

Moon said he will do his best to make this year “a new start for peace on the Korean Peninsula” by closely cooperating with the United States, China and Japan.

“If peace begins in PyeongChang, I will turn it into a stable system that takes root. To solve the North Korean nuclear issue and settle peace, I will pursue more dialogue and cooperative projects,” he said. “I stress once again; the denuclearization of the Korean Peninsula is a process toward peace and a goal at the same time. The denuclearization of the Korean Peninsula, which was declared by the two Koreas, is our fundamental position that can never be compromised.”

In the New Year’s address, Moon also talked about his administration’s stance on the reignited diplomatic row with Tokyo over Japan’s wartime sex slavery of Korean women. After scrutinizing a 2015 agreement signed with Japan by the administration of Moon’s predecessor Park Geun-hye, Moon said the deal is a highly flawed political bargain, and vowed to take further actions to better reflect the victims’ positions.

On Tuesday, Foreign Minister Kang Kyung-wha said Seoul will not scrap or renegotiate the deal. Kang also said the government will appropriate 1 billion yen ($8.86 million) to match Japan’s donation to a foundation formed under the agreement for the victims and Seoul will consult with Tokyo on what to do with the fund in the future.

Moon said during the press conference on Wednesday that he is personally not satisfied with the decision to keep the agreement. “Because my predecessor made an official agreement between the two countries, I had to find the best realistic resolution, although it may not be satisfactory,” Moon said.

“The issue must be resolved with truth and justice,” Moon said. “When Japan admits the truth, offers heartfelt apologies to the victims, learns a lesson from it and works with the international community to prevent a recurrence of the situation, the victims will be able to forgive Japan. I think that is the complete resolution of the comfort women issue.”

He said the government will urge Japan to resolve the issue with truth and justice. “I don’t think it is something that can be achieved by demanding renegotiation or scrapping the deal,” he said.