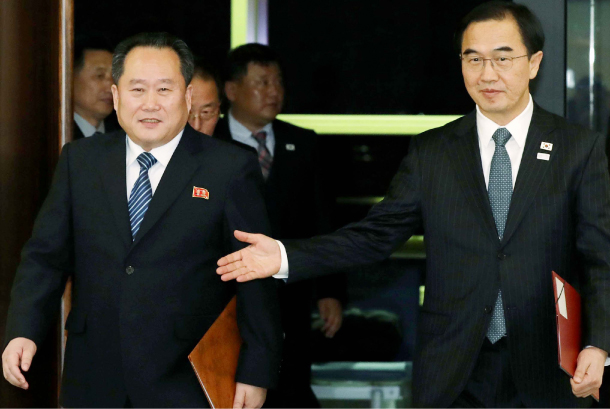 The first inter-Korean dialogue in more than two years Tuesday was significant in that Seoul and Pyongyang managed to transcend their differences and talk face-to-face as the world tries to figure out how to deal with an escalating nuclear threat.

But when the South Korean government unveiled a joint press release Tuesday night after hours of discussions in the demilitarized zone (DMZ) separating the two countries, it was clear that Seoul made huge concessions - and angry disagreement prevailed on some critical issues.

There was no mention of North Korean missiles or nuclear weapons in the shared statement. Pyongyang snubbed Seoul’s offer again to hold a reunion of families separated in the 1950-53 Korean War.

The greatest takeaway for Seoul was that Pyongyang finally agreed to hold military talks to resolve tensions on the Korean Peninsula, an offer the regime had completely ignored when the South Korean government initially relayed it last July along with a request for the family reunion.

Both sides also agreed that high-level government talks to improve inter-Korean relations will continue from here on, and that the countries will boost exchanges and cooperation in various fields.

More working-level discussions for the Olympics will be held in the near future, their schedules shared and negotiated through documents exchanged via the Panmunjom hotline.

Conspicuously missing from the joint press release was any mention of reunions for war-torn families. Vice Unification Minister Chun Hae-sung, one of five South Koreans who participated in the high-level meeting, said Tuesday morning upon finishing the first session that his team had suggested reunions could be held in time for the upcoming Lunar New Year’s holiday, slated for Feb. 15 to 17.

Talks on the issue appear to have floundered in the afternoon, though a specific explanation for the failure was not given by authorities. Last June, the North rejected South Korean lawmakers’ call for reunions, saying through its state media that it wouldn’t budge unless 13 North Koreans “detained” in the South were returned.

They included a group of 12 workers from a restaurant in China run by the North Korean government, whom Seoul said defected voluntarily in 2016. Pyongyang claims they were kidnapped by South Korea’s spy agency.

When South Korean delegates raised the North Korea nuclear crisis Tuesday, Ri Son-gwon, head of North Korea’s five-member delegation, who chairs an inter-Korean relations committee within the regime, insisted that its long-range rockets and “hydrogen bombs” were all aimed at the United States, not the South, according to pool reports.

Another clause in the joint statement that provided fresh fodder for critics of President Moon Jae-in was that the South and North, “as directly-concerned parties on the matters pertaining to the Korean Peninsula, will resolve all issues raised in inter-Korean relations through dialogue and negotiation” - which was considered an attempt by Pyongyang to put a wedge between Seoul and its ally in Washington.

Nam Seong-wook, head of Korea University’s Graduate School of Public Administration, analyzed that the North was trying to pull Seoul out of the international society’s joint effort to denuclearize Pyongyang.

Unification Minister Cho Myoung-gyon, who was chief delegate of the South Korean delegation Tuesday, denied the possibility on Wednesday morning when asked by reporters outside his office in Gwanghwamun, central Seoul, adding he had told Ri “everything” the South Korean government had to say about the nuclear issue.