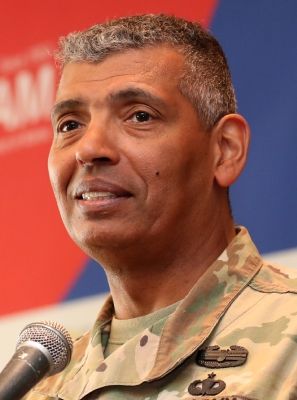 Gen. Vincent Brooks, commander of the United States Forces Korea, speaks at a luncheon hosted by American Chamber of Commerce in Korea (Amcham) at the Grand Hyatt Seoul Wednesday. [YONHAP]

Gen. Vincent Brooks, commander of the United States Forces Korea, cautiously welcomed the high-level inter-Korean talks that took place Tuesday as “good news,” adding they appear to have been “earnest” and “productive.”

“The fact that it happened I think is notable,” Brooks said at the Grand Hyatt Seoul at a luncheon meeting hosted by American Chamber of Commerce in Korea (Amcham) Wednesday, adding that “such a step had not been chosen before by North Korea.”

The first high-level inter-Korean talks since December 2015 were held at the truce village of Panmunjom all day Tuesday, focusing on North Korean athletes participating in the PyeongChang Winter Olympics next month.

“Remember, South Korea had put this offer out months ago, so the fact that something changed should get our attention,” said Brooks, though he also said it is not yet clear what North Korea’s “motivation” is, adding, “We have to see that over time.”

Seoul and Washington last week agreed to delay the annual bilateral joint military exercises Key Resolve and Foal Eagle to ensure the safety and success of the PyeongChang Winter Olympic Games, which kick off on Feb. 9.

“It does appear that the dialogue about the PyeongChang Olympics was productive,” said Brooks, who also serves as commander of the United Nations Command and the Combined Forces Command. “It was a full-day beat, so that’s good news. We’ve seen occasions where North Korea, instead of coming to a meeting with a productive sense, they come in with a disruptive sense, where it’s more theatrical than it is productive. In this case, there appears to have been an earnest meeting.”

He also advised caution. “We have to take that as it is, don’t read anything more into it - I don’t. But we can’t ignore the fact that it happened, and take stock of it as perhaps a change of heart, for now. And that’s the way I look at it.”

The four-star general, addressing business leaders, lawmakers, officers and press, spoke on leadership and held a dialogue with James Kim, chairman and CEO of Amcham on security, the economy and leadership at the event.

He advised, “Don’t give in to fear,” addressing concerns of security on the Korean Peninsula. “It is true that we live in danger. That is undeniable.”

But he continued, “We’re doing what we can to lower that danger. That’s what the ROK-U.S. alliance does, through deterrence and through preservation of the armistice as much as possible ... so that the potential of danger doesn’t have to be fulfilled.”

He added, “I certainly as a commander don’t want to have anyone put at unnecessary risk.”

But he also pointed out he has to “make sure we don’t signal fear to someone who’s fundamentally engaging in terrorism.”

Brooks, who served in Korea in the late 1980s, recollected the changes in the country over the past three decades and added he envisions a reunified Korea another 30 years from now.

“The heart of the Korean spirit, of friendship and openness and generosity, that hasn’t changed at all,” said Brooks, “but the growth of the Republic of Korea to the nation it is now is remarkable.” He pointed to the improvements in the quality of education, health care, military forces, professionalism, government and civil society.

“Thirty years from now, I can’t imagine how many more times it will have changed over,” Brooks continued. “But I have great confidence that I will see a unified Korean Peninsula that is prosperous, free and democratic.”