Incheon’s Terminal 2 is an art-filled travel hub: With works from renowned artists, the airport hopes passengers will feel like they are in a museum

Incheon’s Terminal 2 is an art-filled travel hub: With works from renowned artists, the airport hopes passengers will feel like they are in a museum 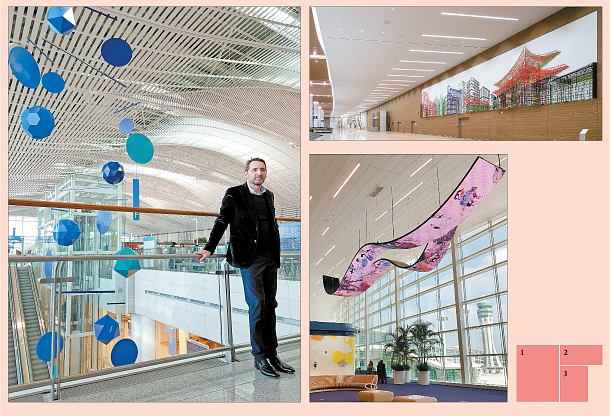 INCHEON - To be not only an airport but an “artport” - this is the ambition of Incheon International Airport Corporation, which recently unveiled its new Terminal 2. As part of the move, the company held a press tour on Thursday of some artworks it commissioned for the new passenger terminal before its official opening on Jan. 18.

The tour started with a pair of two gigantic mobiles in dark blue and green tones created by famous French artist Xavier Veilhan. He represented the French pavilion at the 2017 Venice Biennale and held a solo show at Chateau de Versaillies in 2009.

“It’s a great opportunity to show a work at a place where tens of thousands of people come and go everyday,” the artist told the press. “I wanted to make a work [that was] not so imperialistic but rather transparent and always moving, in connection with the endless movement of the passengers here.”

“This work combines technology and nature, because the mobile was elaborately designed through three-dimensional simulation but it moves only by natural forces,” he added. “So it is organic.” 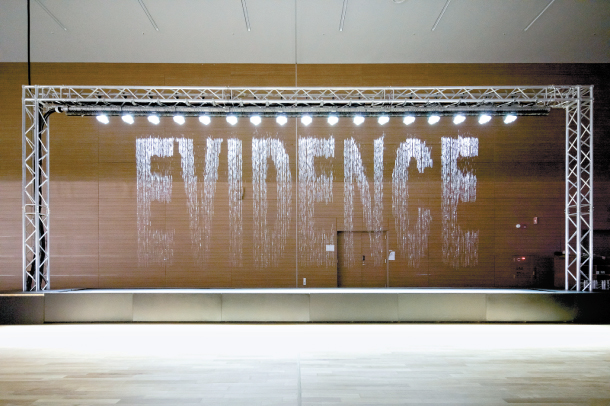 This is in accordance with the general design of Terminal 2, which includes wood floors and chairs.

The tour continued to the departure lounge in two wings of the terminal, where 19 pavilions covered in sheets of colorful cloud-like patterns stand. The covers are works titled “Wings of Vision” by Korean artist Jinnie Seo.

Passengers will also see curved media panels with changing images hanging from the ceiling. They are interactive media art works designed by the company Design be:Che.

German artist Julius Popp’s work “Bit.Fall,” installed in the western part of the baggage claim of the new terminal, is particularly impressive. There are two installations that feature water falling in the shape of letters from nine different languages. The words are taken randomly from diverse news sources worldwide in real time.

In the eastern part of the baggage claim hangs Korean artist Kim Byung-joo’s work “Ambiguous Wall.” At first glance, it looks like a painting, but upon a closer look it is actually a sculpture made of stainless steel rebar bent to resemble Seoul’s architectural landmarks.

“We want the passengers to feel like they were in an art museum,” Incheon International Airport Corporation said in a press release.