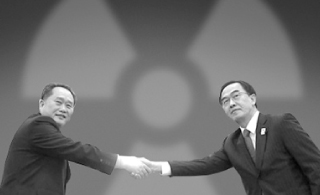 North Korea is unbeatable in negotiations. The regime’s diplomatic skills are an asset of their system. They take initiative with sentimental language, and the high-level inter-Korean meeting on Tuesday illustrated their character.

But Ri nonchalantly spoke of “the desire of the people” almost like a comic actor. He slyly presented a moral monologue mostly targeting South Korean society. His language was graceful and aggressive at the same time, attempting to snarl up vigilance in the South.

The return of North Korea to the negotiating table showed both confidence and anxiety. The confidence comes from Kim Jong-un’s claim of completing nuclear weapons development. The young leader in Pyongyang proclaimed that North Korea was “a responsible nuclear power that loves peace” in his New Year’s address.

The anxiety is rooted on international sanctions and pressure. U.S. President Donald Trump called the inter-Korean meetings “a good thing” and said talks wouldn’t have happened “if I wasn’t firm, strong and willing to commit our total ‘might’ against the North.”

It is the effect of consistency in policy. Simplicity and consistency break foreshadowing and irregularity. Korean President Moon Jae-in also acknowledged such effectiveness at a news conference on Wednesday. “I think President Trump deserves big credit for bringing about inter-Korean talks,” Moon told reporters. “I want to show my gratitude.”

Trump closely watches the negotiating skills of North Korea. In October 2017, he tweeted, “Presidents and their administrations have been talking to North Korea for 25 years, agreements made and massive amounts of money paid hasn’t worked, agreements violated before the ink was dry, makings fools of U.S. negotiators. Sorry, but only one thing will work!”

The symbol of the foolish acts is Christopher Hill, the assistant secretary of state from 2005 to 2009. One of the examples is unfreezing $25 million of a North Korean fund at Banco Delta Asia that Kim Jong-il used as a slush fund.

Back then, North Korea’s vice foreign minister, Kim Kye-gwan, sat across from Hill. His negotiation tactics were cunning and various. He blurred and confused the agenda, fabricated the truth, fanned the nervousness of the other party and made them tired. He also used sudden attacks, unexpected concessions, deception, brinkmanship, smiles and fury.

In the end, Kim was a welsher. Hill was a celebrated negotiator of the United States. The Banco Delta Asia sanctions would have dealt a critical blow for North Korea, but Kim beat Hill terribly, and the slush fund was freed.

During the most recent inter-Korean talks, Ri said that his country’s nuclear weapons and intercontinental ballistic missiles are strictly targeting the United States, not the South Korean people. His remarks are clichéd and deceptive.

North Korea limits the scope and subjects of inter-Korean talks. Ri’s remark indicates Pyongyang’s intention of dealing with Washington on the nuclear issue without Seoul’s involvement. It collides with the Moon administration’s will and principles of negotiation. Moon has said that resolution of the North Korean threat must accompany improvement in inter-Korean relations. The future of inter-Korean talks is uncertain.

North Korea will not give up nuclear weapons. Their development will probably reach the stage of field deployment within the first half of this year. It is a nightmare scenario. The Kim Jong-un regime equates nuclear abandonment as the collapse of his power.

The step before denuclearization is freezing, but North Korea has already broken its promise with the international community to freeze its nuclear program three times. It is hard to verify a freeze.

But what will happen after PyeongChang? When the bubbles subside, inter-Korean talks will unfold. North Korea’s nuclear capability dominates the Korean Peninsula. South Korea does not have nuclear weapons. It will be talks between a nuclear state and non-nuclear state.

The Northeast Asian order works according to power dynamics, and it will be hard to continue a balanced dialogue. South Korea’s negotiation team under Unification Minister Cho Myoung-gyon will feel the sorrow of a country without nuclear power.

However, Seoul must not reduce its goals. Moon’s stance is very clear. “Denuclearization of the Korean Peninsula is South Korea’s basic stance that cannot be compromised.” But denuclearization involves breaking North Korea’s record of unbeatable negotiation. It will take fighting and a sense of ownership.

Denuclearization involves the fate of the Korean people and future generations. The United States and China cannot bring about a satisfying resolution. If the United States goes alone, it will be defeated by North Korea. South Koreans know North Korea’s behavior and tactics better. North Korea will lock the door for nuclear talks, but we will have to get through it ourselves.