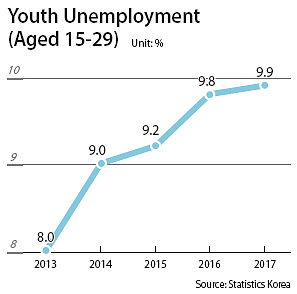 Yoo Young-hyun, 33, quit his job at an auto-parts production plant last month to resume studying for a grade nine public servant job. Yoo gave up on the exam three years ago, but he decided to give it another go after hearing that the Moon Jae-in government plans to create a total of 9,475 public sector jobs this year.

“Upon hearing the news, I was certain that I would have a higher chance of landing a public servant job as there will be more positions available and decided to quit my manufacturing job,” said Yoo, who will take the crucial exam in April.

Yoo is among a growing number of people who have quit their jobs in recent months to cram for the public servant exams on the back of the Moon government’s initiative to increase public sector jobs. In fact, the unemployment rate for those aged between 15 and 29 hit 9.9 percent last year, the highest figure in 17 years, according to Statistics Korea on Wednesday.

The unemployment rate across all age groups stood at 3.7 percent last year, the same as 2016.

The highest unemployment rate among young people since 2000 was partly attributed to the increased number of people studying for government positions. The government also noted that the “shrinking job market” is another reason for the high unemployment rate.

The official unemployment rate does not consider part time workers as unemployed as long as they work on average at least an hour a day.

The government estimated that youth employment will get worse during the first quarter this year as college graduates will enter the job market in February.

“The government will spur job creation by discarding [unnecessary] regulations [that hamper hiring] and promptly carry out subsidy programs and introduce a special budget for job creation [during the first half of this year],” said a government press release.