Spending smart in Seoul’s university hub: The streets of Sinchon are filled with youthful energy and plenty of entertaining, wallet-friendly activities for cash-strapped students

Spending smart in Seoul’s university hub: The streets of Sinchon are filled with youthful energy and plenty of entertaining, wallet-friendly activities for cash-strapped students 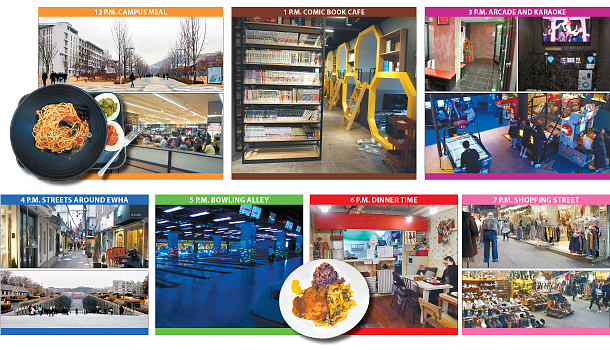 Over the past few years, You Only Live Once, or YOLO for short, was a phrase that many young people adopted to empower themselves to do more with their money.

But the thinking over how people should best spend their funds has recently shifted, largely thanks to comedian Kim Saeng-min and his podcast “Kim Saeng-min’s Receipt,” where he analyzes the consumption patterns of listeners while looking through their account books and evaluates whether or not their spending was too extravagant.

Chasing after the popularity of Kim’s podcast, the comedian has appeared on two television shows that center on being thrifty. Cable channel tvN’s “Salt Tour,” features celebrities traveling on a small budget, and KBS has adapted the hit podcast into a weekly show with Kim at the center.

Keeping with the frugal spirit, Korea JoongAng Daily has chosen several spots in popular neighborhoods around Seoul that readers can enjoy without breaking the bank.

The coolest places to hang out are often found near universities, as businesses cater to students looking to have fun at a bargain price. Sinchon, in western Seoul, is one of Seoul’s most vibrant university neighborhoods, as it is the hub of three major universities in the city - Yonsei University, Ewha Womans University and Sogang University - all of which are within a 20-minute walk of each other. Taking tours around each campus can be worthwhile, and also free, but Sinchon and the neighborhood in front of Ewha Womans University are both full of affordable fun.

As many people on the streets of Sinchon are in their 20s, most of the shops and eateries are built to suit their tastes. To university students in Seoul, Sinchon is known as the place to go for a drink with friends, or to meet other students around their age in famous pubs.

But in order to satisfy students, who are usually living on a limited budget, the neighborhood offers more than just alcohol. While the spots in Sinchon are suitable for people to come in groups both big and small, it’s also perfect for those who’d like to spend a day alone and enjoy themselves amidst a lively atmosphere.

This course offers eight hours of entertainment at around 20,000 won ($18.85), but visitors are recommended to take 30,000 won in cash to make sure that they don’t miss out getting the most out of each stop. 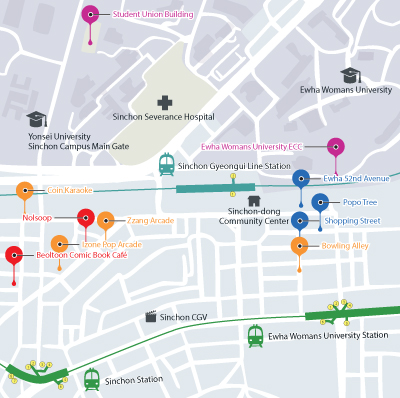 The day starts with a bowl of spaghetti in the student cafeteria at Yonsei University. Get off at Sinchon Station, line No. 2, exit 3, walk to the campus and continue straight through the main gate to get to the cafeteria in the Student Union Building. There are a number of cafeterias around campus, each with distinct characteristics, but the most popular one is Goreulsaem, which sells a wide array of spaghetti and risotto at a price cheaper than any restaurant in Seoul.

For those who’d like to get something more Korean, Bureulsaem on the other side of the cafeteria offers Korean and also Chinese dishes like rice and noodles, also at a cheap price.

After you’ve filled your stomach, take a few minutes to walk around the campus. Go deeper into the campus grounds, and visitors will see old buildings and gardens that not only show the long history of the school, which is one of the oldest universities in Korea, but also make for great places to take photos.

Inside the campus, visitors can see a remodeled version of the original Gwanghyewon building, which was restored in the 1980s.

Walking around in the cold can be hard work, especially these days, when the wind penetrates even the thickest coats. Continue your journey outside of the campus to the busy streets of Sinchon, until you find yourself in the warmth of a comic book cafe like none other.

Beoltoon is a comic book cafe that opened in 2017 and is decorated to look like a bee hive. Within the cafe are not just a wide array of comic books to choose from, but also separate hives where visitors can take off their shoes and relax with friends.

There are foot massage machines in some of the hives, and four cubicles offer projectors that you can connect to your phone to watch movies with. An hour at the cafe only costs 2,400 won per person. Food and drinks are not included.

Another cafe offers comic books and food at the same price. Nolsoop is located nearby, and visitors can also take time to read books or play board games.

Although the cafe doesn’t carry comic books in English, it’s a good spot to take a rest in the middle of the day.

Now that you are rested and warm, it’s time to have some fun. There are numerous arcades in Sinchon, but Izone Pop offers an unlimited amount of games for 3,000 won per hour. From the driving games to table hockey, basketball and DDR, the arcade offers a wide range of fun activities for anyone who’d like to try.

For those who don’t want to spend a whole hour playing games, other arcades like Zzang Arcade offer a wide variety of games to choose from. Make sure to bring cash, as the machines only accept coins.

Another stop you can make is a coin karaoke room, which have become popular in recent years. For people who are feeling upbeat and want to enjoy karaoke without the hassle of organizing a group of friends or paying for a full hour or more, they are a perfect place to kill some time.

Unlike the karaoke rooms of the past which usually cost 10,000 won for a whole hour, the rooms at coin karaoke are much smaller, appropriate for just two or three people.

The machines also take only cash, so make sure you are prepared.

A 10-minute walk from Sinchon to the Sinchon Gyeongui Line Station takes you toward Ewha Womans University, where the streets take on a different ambience from the energized streets of Sinchon. To meet the tastes of the female students at Ewha, many of the shops carry accessories, cosmetics and clothing that can’t be found in Sinchon.

The Ewha 52nd Avenue is located on a side street off of the main drag, and it is full of small shops and boutiques that sell unique goods. From illustrated books and accessories to tailored dresses, the indie shops are perfect for anyone who’d like a special item of their own.

Continuing to the campus of Ewha Womans University, be sure to check out the underground complex just beyond the main gate of the school, known as ECC (Ewha Campus Complex). The massive underground building was designed by world-famous French architect Dominique Perrault, who made a visit to Korea in September for the triennial gathering of the International Union of Architects. The ECC is a landmark not just for students, but also architecture enthusiasts who have come to appreciate the idea of “groundscape,” developed by the French genius, with their very own eyes.

Many tourists take pictures in front of the massive walkway, which, standing at the bottom and looking upwards, overwhelms visitors with its grandeur. You can pop inside the fourth basement level of the building, which has shops and restaurants open to the public. Arthouse Momo is a small cinema inside the complex that plays both indie and wide release films. Reservations can be made online and on site.

Bowling is a fun activity that friends can enjoy together regardless of their skill, unlike billiards or computer games, which may be tough for beginners to take part in. Walk toward the Ewha Womans University subway station to the large Hello APM building.

In the basement level, there is a bowling alley that glows with blacklights and plays all of the hottest K-pop tracks at full volume. A game costs 5,000 won per person, and 2,000 won for the shoes. Drinks are available at the counter, as well as small snacks.

Compared to those near Yonsei University, restaurants near Ewha tend to be smaller and cheaper, with menus filled with dishes that are popular with female diners.

If restaurants in Sinchon are suitable for big groups of friends to eat and drink together on a fun night out, the eateries at Ewha are comparatively peaceful, with a lot of people eating alone, enjoying light background music.

The neighborhood has a number of spots for different tastes, and one of the most popular spots is Popo Tree, where visitors can fill their bellies with pork steak for just 5,000 won. The dish comes with a steak, rice and stir-fried vegetables. Hamburger steak, beef and chicken steak cost extra.

Other cheap and tasty restaurants recommended by a student from Ewha include: Bangbae Yubu Gimbap, wich offers a variety of generously filled gimbap, or rice rolls, that cost 4,000 won per roll; Nameless Pasta, where a bowl of spaghetti costs less than 6,000 won; Fried King, which sells a set that includes a hot dog, French fries and drink at 6,400 won; and burrito joint El Sueno, where a burrito costs around 3,500 won.

For those who’d like to get some new and trendy clothing at a cheap cost, there are various famous spots around Seoul for affordable shopping.

The shopping street in Ewha is one of them, where there’s an alley full of shops that carry the trendiest fashions at a low price to meet both the taste and budget of university students. The shops each carry different styles of clothing, shoes and accessories, so make sure to visit many before making your final choice.

A T-shirt usually costs around 10,000 won, and can even be as cheap as 5,000 won. To get the best bargain, take an hour or so to look through each and every corner to get the best outfit for you.

If you’d like to end your day with the 24,000 won you would have spent thus far, opt to just look around the shops and plan your next outfit. If you’d like to get your hands on some of the items, make sure to take cash, as most of the shops charge extra for credit cards.