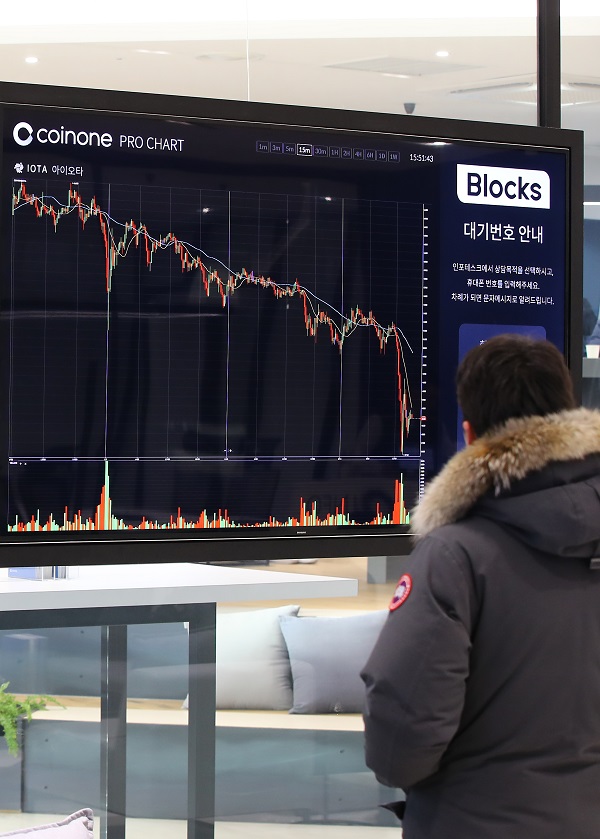 A screen at a cryptocurrency exchange on Thursday shows the price of major cryptocurrencies on the decline. [YONHAP]

A high-ranking government official confirmed on Thursday that the Korean authorities are preparing to close down cryptocurrency exchanges in Korea completely, leading the prices of major cryptocurrencies to nosedive.

“Concerns regarding digital currencies are mounting and the Justice Ministry is preparing a bill to ban digital currency trading through exchanges,” said Minister of Justice Park Sang-ki during a meeting with local reporters on Thursday.

While Park did not disclose the exact timing of the proposed shutdown, he said all the government agencies involved in the matter, such as the Ministry of Strategy and Finance and the Financial Services Commission, have agreed on the Justice Ministry’s stance.

The government launched a task force in December to come up with measures to regulate cryptocurrency trading amid rising bitcoin frenzy in Korea. The government placed the Ministry of Justice in charge of the task force instead of the Financial Services Commission, the country’s top financial regulator, which many experts saw as a signal that the government intended to police the market.

During a meeting on Dec. 28, the Justice Ministry proposed that exchanges in Korea be closed down completely and that special legislation should be passed to do so.

“Cryptocurrency trading right now looks a lot like gambling or speculation,” Park said, who said the foreign media was calling the drastic price gap between the Korean price and the global average — as high as 25 percent — a “kimchi premium,” a clear indicator that trading in Korea was “abnormal.”

If the government shuts cryptocurrency exchanges, investors will only be able to buy and sell the so-called tokens through over-the-counter trading. Some experts went as far as saying that trading will go onto the so-called dark web, a part of the internet that’s difficult to access and used for illicit activities such as fraud.

Korea’s cryptocurrency market, the third-largest after the United States and Japan, has had a wild week.
Park’s remarks came a day after leading Korean exchanges were raided by authorities for alleged tax evasion.

The National Tax Service raided the country’s major cryptocurrency exchanges Bithumb and Coinone on Wednesday to see if they were fulfilling tax obligations. The tax agency refrained from unveiling details of its investigation, but the two exchanges said that it was far from a high-level investigation.

“It was not like a raid that seizes computers,” a spokesperson at Coinone said.
“The inspectors asked things related to taxes and requested some information,” the spokesperson said.
The National Tax Service raided the office of Coinone in Yeouido in the morning and Bithumb’s headquarters in Yeoksam-dong, southern Seoul, later in the afternoon.

The police on Wednesday also launched an investigation into Coinone for providing margin trading for cryptocurrencies, which the authorities considered a “gambling service.”

Before the raid, financial authorities launched an investigation into local commercial banks that provide account services to the exchanges.
On Monday, CoinMarketCap, a global cryptocurrency index, said it decided to exclude prices from Korea due to extreme divergence from the rest of the world and limited arbitrage opportunity.

As a result, the value of bitcoin, the top cryptocurrency in the world by price and market cap, tumbled through the week. The price of one bitcoin started out at $17,527 as of Sunday. On Monday, it shed about a $1,000 and closed the day at $16,476 before falling to $14,588 on Wednesday. As of press time on Thursday, shortly after the statement by the Justice Minister went viral, bitcoin was being traded at $13,519.

If the government goes through with its plan to shut down the exchanges, Korea will become the second country in the world to do so after China.

China, previously the largest cryptocurrency trading market in the world, announced it would ban exchanges from operating in September and shuttered the last exchange in November, citing the possibilities of money laundering and other illegal activities, concerns that Korean policymakers share.