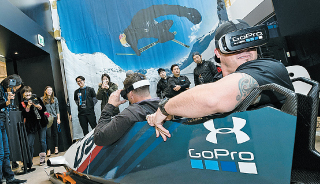 After its short-lived drone business failed to take off, GoPro has vowed to go back to what it knows best - cameras and video editing software.

“Our goal is to make products that enable people to capture and share unique experiences that you can’t do with your mobile phone,” said Rick Loughery, vice president of global product & lifestyle communications at GoPro, at a press briefing held in Seoul Thursday intended to introduce Fusion, its latest action camera. “We will continue to focus on cameras and mounts and accessories that allow [videos to be shot in] unique perspectives and software.”

The U.S. camera maker announced on Monday that it will drop the drone business it had entered in 2016 with the launch of the “Karma” drones. The big selling point was the option to mount GoPro action cameras directly onto the device, but tough competition from Chinese drone companies like DJI ate into GoPro’s sales.

According to Loughery, GoPro has been focusing on software for four to five years already and will find a competitive edge there with new releases that make video editing simpler and easier for a wide range of users.

At Thursday’s briefing, GoPro introduced its latest invention - Fusion, a 360-degree camera - to the Korean market along with a video editing tool. The introduction to the local market comes just a day after the company unveiled the product at the Consumer Electronics Show held in Las Vegas.

Fusion allows users to create virtual reality content as it can capture 360-degree spherical videos. The camera can capture videos up to 5.2K resolution at 30 frames per second and photos at 18 megapixels. The device also records 360-degree audio through an array of mics.

The camera really comes into its own when paired with the new editing app, dubbed OverCapture.

Unlike traditional fixed-perspective films, users can now re-frame videos from multiple perspectives as if they had stitched together footage taken from different angles.

OverCapture is currently available on iOS, but the company plans to release it on Android in the next month.