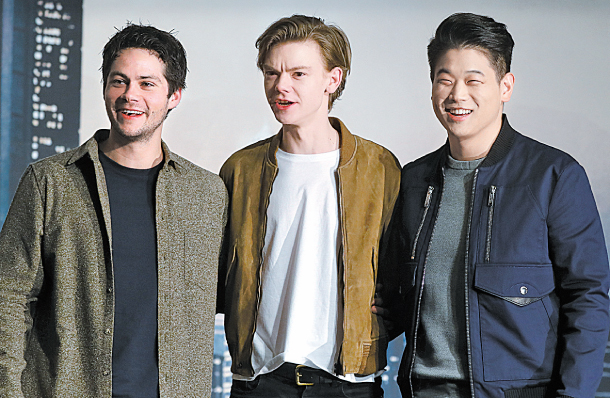 After a one-year delay due to a serious on-set accident, the third Maze Runner film, the finale of the series, is finally set to be released next week.

Adapted from James Dashner’s young adult post-apocalyptic dystopian sci-fi novel, the series takes place in an artificial environment built as an experiment by mysteriously hidden scientists called Creators. There, a community of teen boys who know nothing of the past except for their names, known as the Gladers, try to solve the Maze.

“Maze Runner: The Death Cure” centers on the journey of Thomas (Dylan O’Brien) and a band of Gladers who are forced to break into the legendary Last City - a WCKD-controlled labyrinth - to save their friends.

The film shows how a group of boys have turned into men, said O’Brien during a press event held in Yeouido, western Seoul, on Thursday.

O’Brien further explained how the movie provides a new perspective to the story for the first time in the franchise.

“He [Thomas] so strongly believes what he is doing is right, but for the first time, he questions that. And audience’s perspective gets to shift with Thomas’,” O’Brien said. He further explained that his character comes to the realization that maybe he “hasn’t been entirely right” and that “everyone has a little bit of right and wrong.”

Korean-American actor Ki Hong Lee, who, along with English actor Thomas Brodie-Sangster, made his second visit to Seoul to promote the film, said that the biggest reason behind the popularity of “The Maze Runner” is that it does not diverge much from the original novels.

“It’s such a great adaptation. It does a good job getting the fans of the books into the movies, and I think fans very much appreciate that,” Lee said.

While revealing that “The Death Cure” is the most action-packed movie of the franchise, Lee also said he wasn’t so pleased with the script. “I wanted my character to be quickly rescued, but it took [the Gladers] too long to finally save my character,” Lee said half-jokingly.

Though sad to let the franchise go, the actors also expressed their excitement for what the future holds for them.

The franchise has been a growing experience for the whole cast. “It’s been such a great experience. It’s sad that it has come to an end now, but we’re all ready to move on, and take what we learned, and adapt and grow,” Brodie-Sangster said.

The 20th Century Fox release will hit theaters on Wednesday. The film runs for 143 minutes, and is rated 12 and above.