Moon briefs both Trump and Xi on talks with North

Moon briefs both Trump and Xi on talks with North 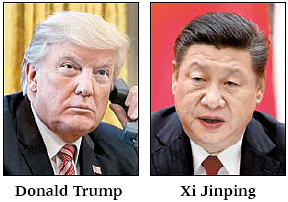 Basking in the success of the first inter-Korean talks in two years, President Moon Jae-in talked to the leaders of the United States and China to discuss efforts to drag the Kim Jong-un regime into negotiations over its denuclearization.

Moon briefed U.S. President Donald Trump in a 30-minute phone call on Wednesday night about the South’s high-level talks with the North on the previous day. Moon had another telephone talk with Chinese President Xi Jinping on Thursday evening.

According to the Blue House, Xi and Moon agreed that the inter-Korean talks should lead to denuclearization of the Korean Peninsula. “Xi also said he strongly supports Moon’s position that improvement of the two Koreas’ relations and denuclearization of the Korean Peninsula must progress together,” the Blue House said Thursday.

Moon and Trump “agreed to the prospect that the inter-Korean talks may go beyond the North’s participation in the PyeongChang Olympic Games and eventually lead to talks between the United States and the North for denuclearization of the Korean Peninsula,” Yoon Young-chan, senior presidential secretary for public affairs, said Wednesday night. “The two leaders agreed to closely consult on the progress of the inter-Korean talks in the future.”

“Trump told Moon that the United States is open to dialogue with North Korea at an appropriate time and under the right conditions,” Yoon said.

Trump also rejected a media report that he was considering a military attack on the North, Yoon said. The American president told Moon that he wants the South to tell the North that there will be no military action while the two Koreas are talking, Yoon said.

According to Yoon, Moon told Trump that his firm principles and cooperation contributed to the resumption of the inter-Korean talks. “The two leaders agreed that they need to maintain their strong stances for the success of the talks,” Yoon said.

Trump also said he will send Vice President Mike Pence as the head of the American delegation to the PyeongChang Games. Speculation is high that Pence may meet with a senior North Korean official on the sidelines of the sports event. The North has not announced the head of its delegation.

The White House also issued a statement on the two presidents’ talks. “The two leaders underscored the importance of continuing the maximum pressure campaign against North Korea,” it said. “President Trump expressed his openness to holding talks between the United States and North Korea at the appropriate time, under the right circumstances.”

During a phone call last week, Trump agreed to delay Korea-U.S. joint military exercises until after the Olympics and supported Moon’s policy of inter-Korean dialogue.

Trump also expressed hope that inter-Korean talks would lead to the denuclearization of North Korea. “Hopefully, it will lead to success for the world - not just for our country, but for the world,” he said during a cabinet meeting on Wednesday after his phone call with Moon. “And we’ll be seeing over the next number of weeks and months what happens.”

Later in the day, Trump said he did not expect a war with North Korea to resolve the nuclear crisis. During a press conference with Norwegian Prime Minister Erna Solberg, Trump said the United States has problems with the North, but “a lot of good talks are going on right now.”

“I see a lot of good energy. I like it very much what I’m seeing… hopefully a lot of good things are going to work out,” he said.

The White House also issued an announcement about Pence’s trip to the sports event on Wednesday that included a strong warning to the North. It said Pence will also visit Seoul and Tokyo to discuss security and stability on the Korean Peninsula and travel to Alaska to review ballistic missile defense facilities. “The vice president is traveling to the Olympic Games in South Korea to reinforce the strong U.S. presence on the Korean Peninsula and send a clear message of American resolve to the North Korean regime,” said Jarrod Agen, Deputy Chief of Staff to Vice President Pence. “Trump thinks it is good if inter-Korean talks will bring about changes in the North’s attitude on the nuclear issue. If not, he can still use sanctions and pressure,” said Choi Kang, vice president of the Asan Institute for Policy Studies.