New title for bigwig in Pyongyang

New title for bigwig in Pyongyang 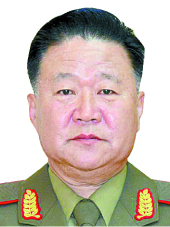 Choe Ryong-hae, widely believed to be the second most influential man in the North Korean regime after leader Kim Jong-un, has added yet another job title to his burgeoning profile: director of the Organization and Guidance Department of the Central Committee in the Workers’ Party, which is in charge of personnel control within the ruling party.

South Korea’s Unification Ministry, which handles inter-Korean affairs, announced the news Thursday and said that it assumes Choe was officially given the job last October during the second plenary meeting of the 7th Central Committee of the Workers’ Party, an annual gathering of Kim’s closest political aides to discuss domestic and international issues in addition to announcing personnel changes.

At that time, the North’s state-run newspaper Rodong Sinmun said Choe was appointed a director of a department controlled by the party’s Central Committee, without specifying the department.

The Unification Ministry did not explain its sources for Choe’s new role.

South Korea’s spy agency said late last year that Choe was believed to have led a probe of the General Political Bureau of North Korea’s army, which found Hwang Pyong-so, its director, and Kim Won-hong, his deputy, punishable for “impure attitudes.”