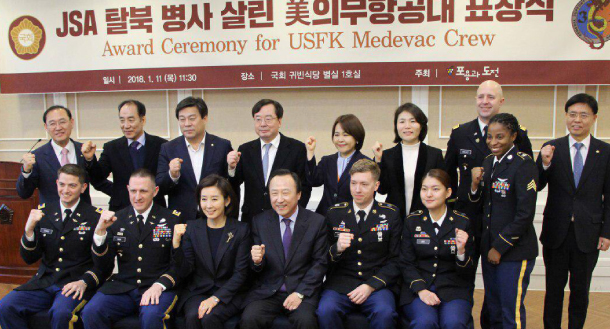 Soldiers and Korean lawmakers pose for a National Assembly award ceremony Thursday in Seoul for the U.S. Forces Korea aeromedical evacuation crew who saved Oh Chong-song, the North Korean soldier who defected at the Joint Security Area on Nov. 13. Oh was severely wounded after being shot by North Korean soldiers and transferred by helicopter by the USFK Medevac crew to Ajou University Hospital in Suwon, Gyeonggi. Recipients of the award include co-pilot Eric Tirro, a U.S. chief warrant officer, front row left; Lt. Col. Darren W. Buss, commander of the 3-2 General Support Aviation Battalion, second from left; and Carroll Moore, specialist and crew chief, fifth from left. Liberty Korea Party Rep. Na Kyung-won presented the award and said, “Without your devotion and effort, it would have been difficult to save Oh’s life.” Lt. Col. Buss, who accepted the award on behalf of his battalion, said, “It is our privilege to serve on a daily basis with our Korean counterparts as we strengthen the Korea-U.S. alliance.” The award was proposed by Ajou University Hospital’s trauma Specialist Dr. Lee Cook-jong, who treated Oh and also attended the ceremony.