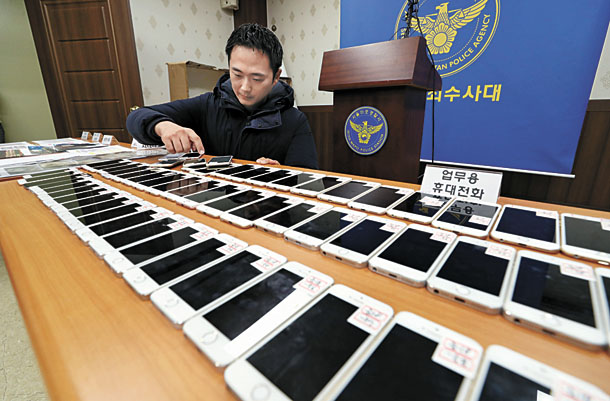 A Taiwanese-operated voice phishing ring busted in Jeju last December is giving the Seoul Central District Prosecutors’ Office an unusual headache. With both the Taiwanese and Chinese governments requesting prosecutors repatriate suspects, Korean authorities are trying hard to do their job while not damaging any diplomatic relations.

The big problem is that China wants to try all the Chinese suspects, including the ones from Taiwan.

Last September, the Representative Office of Taiwan in Korea informed authorities that one of its nationals residing in Seoul was leading a voice phishing ring. After three months of undercover investigation, authorities identified two apartments in Seogwipo, Jeju Island as the phishing ring’s “call center.” On Dec. 20, police, fire authorities and immigration officials raided the apartments and rounded up 51 Taiwanese, seven Chinese and two Korean citizens, including the 35-year-old Taiwanese ringleader. All but two - one Korean and one Taiwanese - are being detained.

The ring targeted people in China. Pretending to be Chinese security officials, callers told the targets that their personal information had been hacked or leaked and instructed them to wire money to receive help. Some 500 million won ($470,000) was extorted from people every month from April to December.

Fearing that their nationals will be repatriated to mainland China, Taiwanese representatives in Korea have been making frequent visits to the officials in charge of the case and asking for regular updates via calls and messages. “Our most important task is to prevent the Taiwanese suspects from being sent to mainland China,” a member of the Office said Tuesday. “Though we would like for them to be repatriated to Taiwan, if that is not possible, we would prefer them to be tried by the Korean judicial system.”

The Chinese embassy has its own reasons for making the extradition requests. Not only were the victims of the scam Chinese nationals, but this is not the first time Taiwanese voice phishers have systematically targeted people in mainland China.

For the last five years, Taiwanese nationals have been running large-scale phishing rings in Kenya, Uganda, Malaysia, Cambodia, Japan and Korea targeting mainland Chinese victims. According to the Chinese government, there were some 60 voice phishing complaints submitted last year, a tenfold increase since 2011. The estimated losses were 22 billion yuan ($3.38 billion).

Korean authorities are now in the hot seat, not wishing to damage relations with either of the countries. Since accepting the “One China” policy and establishing formal diplomatic ties with China in 1992, South Korea has no official relations with Taiwan.

“Our relationship with China, which we’ve just barely mended, could be damaged again from one case of poor judgement,” one prosecutor commented, referring to the relations strained over the Thaad antimissile deployment.

Prosecution sources say as of now, they think it would be wisest to try and investigate the voice phishers in the Korean judicial system.