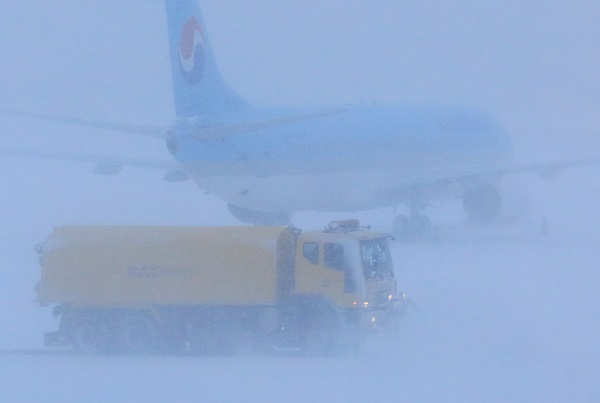 A snowplow clears a runway at Jeju International Airport on Thursday, where more than 100 flights were cancelled or delayed because of the snow. [YONHAP]

Snow in Jeju Thursday morning led to more than 100 cancelled or delayed flights and left over 5,000 people stranded for hours as a cold spell hit the country.

From around 8:30 a.m. to 11:10 a.m., nearly 90 flights were cancelled and 30 were delayed at Jeju International Airport, which had to dispatch some 10 snow plows to clear runways covered with more than 1.5 centimeters (0.6 inches) of snow.

At least 14 flights into Jeju had to turn back in mid-flight to their original destinations.
“We started running the flights normally around 11 a.m.,” said the Jeju branch of the Korea Airports Corporation.
At around 11 a.m., there were 5,050 people stuck at the airport.

But flights continued to be cancelled past noon and by 1:30 p.m., a total of 129 flights into and out of Jeju were cancelled.
A few flights at domestic airports – Gimpo, Gwangju, Gunsan, Gimhae, Ulsan, Daegu and Cheongju – were also cancelled Thursday morning.

The Korea Meteorological Administration (KMA) issued cold wave warnings through most of the country by Thursday morning, and heavy snow warnings and advisories for the southwest regions including Muan County and Mokpo in South Jeolla, Gunsan in North Jeolla and Jeju.

The temperature in Seoul around 7 a.m. Thursday morning dropped to as low as negative 12.6 degrees Celsius (9.3 degrees Fahrenheit), the lowest this winter, with the real-feel temperature at negative 16 degrees, the KMA said.

In South Jeolla, where areas have been hit with heavy snow and a cold spell for four days in a row, the heaviest snowfall in the four days was around 20 centimeters in Hampyeong, Naju, Yeonggwang and Muan counties.

A bus slid on ice in Jeju City around 8:35 a.m. Thursday, hitting a curb and injuring 15 passengers. On Wednesday, 15 cars were involved in an accident on a road in Seogwipo, injuring three people.

Gwangju from Tuesday sprayed some 2,150 tons of deicing agents on some 170 roads to prevent cars from skidding. The city closed down all of its 306 kindergartens on Thursday and asked day care centers and kindergartens to not run buses.

The South Jeolla Education Office advised all 526 kindergartens in the province to close down for the day.
The KMA said more snowfall is expected on the southern coast of South Chungcheong over the night from Thursday to Friday. It added that the temperature on Friday morning will be negative 15 degrees Celsius in Seoul, negative 11 degrees Celsius in Daegu, negative 9 degrees Celsius in Gwangju and negative 1 degree Celsius in Jeju. It said the cold spell will let up from Saturday afternoon.