Without registration, some slip through Korea’s cracks

Without registration, some slip through Korea’s cracks 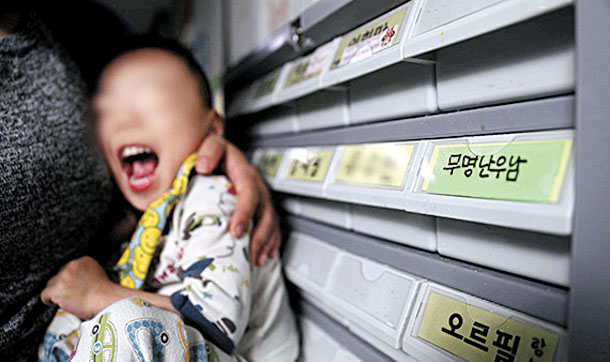 A boy who was abandoned at a church in Gwanak District, southern Seoul, doesn’t exist according to Korean law. [WOO SANG-JO]

In June 2015, a baby boy was abandoned at a church in Gwanak District, southern Seoul, with part of his umbilical cord still attached. Though doctors found he suffered from both brain damage and lockjaw from an infection, the boy cannot receive any state living subsidy or disability allowance.

The reason: His parents abandoned him before registering his birth. With no official documentation, in the state’s eyes he technically doesn’t exist.

Under Korean law, children need to have birth certificates signed by family members in order to be registered with the government and be eligible for any kind of public benefit. A 2012 revision to the law obligating parents to register their children’s births before putting them up for adoption drove more families to abandon newborns in so-called baby hatches at churches or charities. Unmarried women in particular wanted no official trace of having given birth.

The boy abandoned in Gwanak has been staying at ChildFund Korea’s center for disabled children since last August. Though it’s possible to register him with the government, the process would require 10 different documents and take over six months, a lot of work for the center, which has nearly 50 other abandoned and unregistered children in their care.

There is no official data on how many unregistered children were born to the 223,700 undocumented migrants in Korea, a number recorded in May 2017 by the Justice Ministry.

Adults, especially homeless people, may also go unaccounted for in Korea. Even if they are registered at birth, the resident registration identification of homeless persons is revoked after extended periods of having no registered address. This state of invisibility makes them particularly vulnerable to injustice. In the 2014 human trafficking scandal on salt farms at Sinan County, South Jeolla, in which police discovered hundreds of people forced to work in slave-like conditions, 27 victims were found to have been homeless and unregistered with the government.

The most recent estimate of the number of people without government registration was 11,127, according to a 2005 report from the Korea Institute for Health and Social Affairs. In an effort to address the situation, the Korea Legal Aid Corporation, an affiliate of the Ministry of Justice that provides legal support for the underprivileged, helped register 1,519 of these people between 2008 and 2017.

“Having a name is fundamental to human rights,” explained a member of the corporation.