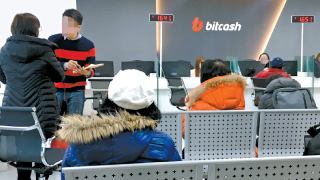 Shinhan Bank, the second-largest commercial bank in Korea, and Industrial Bank of Korea announced they would not go through with plans for the transactions.

“We have already finished developing the system for adopting real-name accounts for cryptocurrency transactions but we have concluded it would be better not to proceed when cryptocurrencies have become such a serious social issue,” said a Shinhan Bank spokesman.

The bank is temporarily banning deposits in anonymous accounts used for cryptocurrency trading from Jan. 15, only allowing withdrawals. The suspension will remain valid until the bank has established a new system that prevents money laundering.

On Friday it was discovered that Shinhan Bank two days earlier notified major local cryptocurrency exchanges such as Bithumb and Korbit that they should come up with measures to get rid of existing anonymous accounts.

On Thursday morning, Minister of Justice Park Sang-ki told reporters that his ministry was preparing a bill to prohibit digital currency trading through exchanges, without elaborating on the timing. Park’s remarks seem to have not been coordinated with other parts of the government. They prompted anger from cryptocurrency investors and thousands signed a petition asking the Blue House to halt the crackdown on cryptocurrency trading.

The issue “still requires additional discussion among related government institutions,” he said, adding they are trying to come up with “desirable regulations on a reasonable level.”

He went on to defend blockchain, the underlying technology behind cryptocurrencies.

“[Regulating cryptocurrencies] embraces the issue of blockchain, which some people claim will be a fundamental pillar of the fourth industrial revolution and bears a lot of connections with logistics,” he said. “I think we should have a more balanced perspective on blockchain.”

“When the government renews cryptocurrency policies so often, how can people trust it?” said Kim Jin-hwa, co-head of the Korea Blockchain Association, on Friday. “The government should take all the responsibility for considering up to 4 million virtual currency investors potential criminals.”