2017 was good for mutual funds

2017 was good for mutual funds 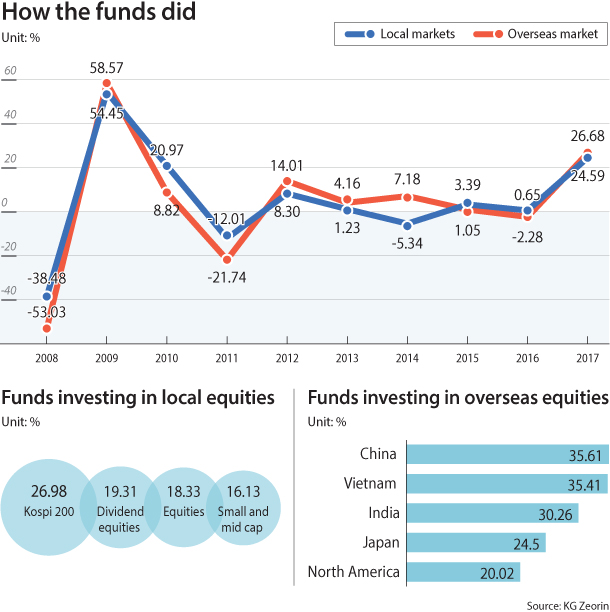 The mutual fund market in Korea had a good 2017 thanks to a bullish performance by leading large cap companies, an upswing in the tech heavy Kosdaq late in the year and a generally good economy in Asia.

Index funds, which are traded like a common stock on the stock exchange, thrived for the second year in a row. In the first three quarters of the year, large-cap centered funds such as the Kospi 200 saw yields grow. But in the fourth quarter the situation changed. While large caps on the Kospi such as Samsung Electronics took a breather, small and mid-cap companies on the Kosdaq rose in the fourth quarter.

Yet despite the fourth quarter rally on the Kosdaq, last year’s big winners were large caps.

Among the top five equity funds by yield, three were funds investing in the junior Kosdaq market. But when comparing the average yield, large caps led the field.

These were the conclusions of fund evaluation company KG Zeroin and the JoongAng Ilbo.

Last year the Kospi hit an all-time record of 2,557.97 on Nov. 3. The Kosdaq was a bullish market after October and at one point broke the 800 mark.

The Chinese, Vietnamese and Indian markets helped funds investing in Asia enjoy a good year. Funds investing in the Chinese market had an average yield of 35.61 percent, followed by Vietnam’s 35.41 percent and India’s 30.26 percent. Other advanced markets saw even better yield, with Japan’s at 24.50 percent and North America’s at 20.02 percent.

Last year a net of 5.76 trillion won ($5.41 billion) was withdrawn from local equity funds, while overseas equity funds enjoyed a net increase of 3.8 trillion won. This was largely because government tax benefits for funds investing in overseas markets were scheduled to end at the close of last year, which encouraged financial companies to promote last minute entry into such funds. Additionally the higher yields helped attract larger investors. Market analysts are positive about this year’s mutual fund market.

“In the last eight years, the U.S. market was the only one enjoying improvements, but since last year the mood has been changing,” said Cho Yun-nam, a top official at Daishin Securities. “The pace of recovery will get stronger, particularly centering on raw material and emerging market stocks.” Cho said the current trend is similar to 2005 and 2006, when interest rates were raised.

Shinyoung Asset Management CEO Huh Nam-kwon was less optimistic, saying that while corporate profits will increase, their rise will be less than last year’s.

“If you are an investor who likes high risks,” Huh said, “it would be better to invest in active funds consisted of small and mid-caps over index funds.”