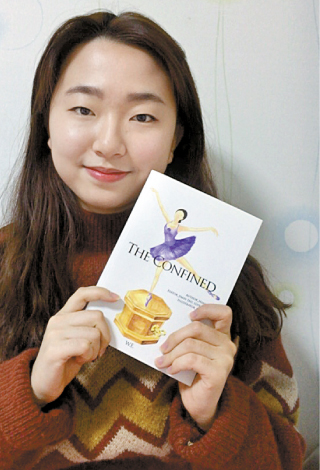 The writer of a dystopian novel about a 23rd-century future where the elite rules the world and robots steal jobs from the poor is a month away from graduating high school.

Lee Hanol, an 18-year-old senior at Daegu Hyehwa Girls’ High School, wrote “The Confined,” a 236-page English-language novel that explores issues like environmental degradation and poverty, when she was just a sophomore.

“While I was studying English, I read a lot of books,” Lee told the Korea JoongAng Daily in an interview last month. “I then started to write books and it became a passion and a really good hobby for me.”

At first, Lee did it to improve her English. Her family moved to the United States when she was 4 years old, and she wanted to adjust to school.

After returning to Korea for fifth grade, Lee worked hard not to lose her grip on writing. She tried to squeeze in at least an hour of writing every day while keeping on top of her schoolwork. When she couldn’t find time to write, she jotted down ideas in a notebook.

The publication of “The Confined” occurred by happenstance. The school had a connection with a publishing company, Hansol Press, and members of Writers’ Enthusiasm, a writing club at Lee’s school that she helped found, encouraged her to turn her writing into a novel.

Lee rushed the first edition, completing it in late October 2016 to meet a deadline for an exhibition of local English writing clubs organized by the Daegu city government that year. Her club supported her, helping design the cover, formatting the text and making videos to advertise the book. Her English teacher spent time outside work — up to 72 hours, Lee said — editing the book.

The young writer also had support from Wattpad, an online storytelling community. Lee uploaded her novel in serial format to the site after publishing it with Hansol. She credits Next Big Recognition, a group of peer reviewers, for giving feedback and helping her learn from others’ work. Her active participation on Wattpad allowed “The Confined” to get noticed on the site, and the series, which she used as a basis for the novel, was promoted on the site’s adventure genre section by Wattpad staff.

For a couple of months, until last November, Lee had to temporarily stop writing to direct her attention toward studying for Korea’s nationwide university entrance exam, but now, with college applications behind her, Lee has more time to focus on her writing.

When she’s not updating chapters of her latest online serial “Our Fading Stars,” she’s reading the newest work from her favorite author, Rick Riordan, who is best known for the “Percy Jackson and the Olympians” series.

Lee has no plans to stop writing. She recently received an acceptance letter from Korea University, one of the most prestigious schools in the country, and hopes to pursue a degree in English literature.

She also wants to find a bigger publisher for “The Confined” to bring it to a wider audience. So far, she has published 80 copies of “The Confined,” 20 of which are in her school library for loan.