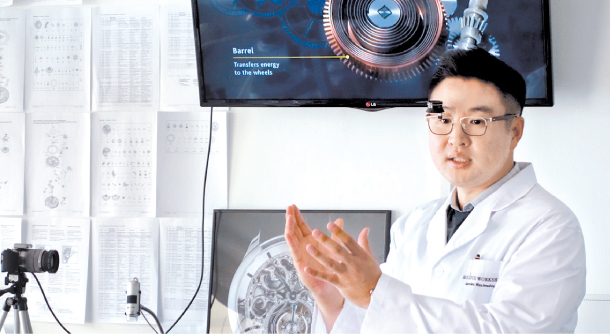 Kim Han-moi, CEO of local watchmaker Moi Watch, has been in the business for 10 years. Kim started the company in 2009, giving it his own name. He searched for a uniqueness he could bring to the market and decided to incorporate najeonchilgi, or traditional mother-of-pearl craft, into his product.

“I thought about what kind of watch could be produced only in Korea,” said Kim. “And I found the answer with Najeonchilgi.”

Najeonchilgi combines various materials, most notably mother-of-pearl. It involves different craft techniques such as woodwork, metalwork and lacquering. It is best known for its use in jewelry boxes and wardrobes in Korea.

Kim attended Baselworld, the major watch and jewelry show held in the city of Basel, Switzerland, before he started the company. His tenacity finally bore fruit last year when all five najeonchilgi watches he presented at the show sold out. 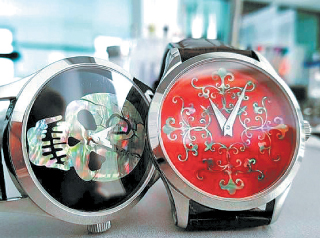 While Koreans think of najeonchilgi, they think of something old and traditional. But the craft is gaining popularity among the rich in the Middle East as well as European countries such as France and Russia. Kim spotted that trend by watching international news channels.

The merits of najeonchilgi include the natural and unique color of mother-of-pearl as well as outstanding preservability. Kim also applied lacquer on the watches, protecting them from heat and humidity. The durability of najeonchilgi has been proven by the fact that there are some jewelry boxes and wardrobes that have stayed in good condition and hundreds of years. And because of the variations in mother-of-pearl, each watch seems unique.

For boxes and wardrobes, all craftsmen have to do is attach najeonchilgi on top of wood. For watches, it must be glued onto metal. One problem Kim faced was thickness. He had to place najeonchilgi on top of the metal and coat it with several layers of lacquer, which made the end product too thick. Kim spent more than three years coming up with his own method to resolve such issues.

“The history of Swiss watches is 300 years old, but I told [audience and buyers at the Baselworld last year] that Korean najeonchilgi’s history dates back more than a thousand years,” said Kim. “I got the idea from the story of the late Chung Ju-yung, the founder of Hyundai Group, who landed a ship construction deal by showing buyers a coin featuring a Korean turtle ship.”

Kim’s tenacity and craftsmanship caught the attention of Yvan Arpa, a Swiss watch designer who designed the Samsung Gear S3, a smartwatch sold by Samsung Electronics. Arpa was surprised by the fact that Kim’s watchers were sold out at Baselworld and suggested a partnership, according to Kim.

Kim first got interested in watch craftsmanship during the Asian financial crisis in 1997, when he saw people on television giving up their expensive gold watches to donate to the government.

Now that he’s in the watch business, he also runs classes to teach his craftsmanship to others.

“While teaching the craft method itself is important, I think it’s also important to create a system where we hand down the technique to the next generation, like the Swiss,” said Kim. “I would like to overcome the notion that Koreans, while dexterous handymen, lack a system of legacy.”