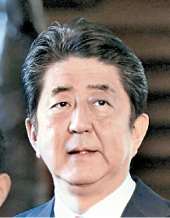 “The agreement was a promise between the two nations,” Abe told reporters. “Keeping this promise is an international and universal principle. We cannot accept Korea’s unilateral demands for additional measures.”

“We have been faithfully executing every promise we made,” he said. “We will continue to strongly ask Korea to do the same.”

The remarks, made before Abe leaves for a six-nation trip to Europe, was the Japanese leader’s first public response to the recently reignited diplomatic row between the two countries over the issue.

After reviewing the 2015 agreement, struck between foreign ministries of the two countries and endorsed by Abe and Moon’s predecessor Park Geun-hye, Korea said earlier this month that the deal is highly flawed and failed to reflect the victims’ needs.

In 2015, the two countries struck a deal that included a Japanese government apology and a multimillion-dollar fund for the victims. The two countries also agreed that the settlement was “final and irreversible” as long as Japan faithfully followed through with its promises.

This week, Korean Foreign Minister Kang Kyung-wha said Seoul will not scrap or renegotiate the deal. She also said the government will appropriate 1 billion yen ($8.86 million) to match Japan’s donation to a foundation formed under the deal for the victims and Seoul will consult with Tokyo on what to do with the fund in the future.

During a New Year’s press conference on Wednesday, Moon urged Japan to take additional measures to offer a true apology to the victims.

Following Moon’s remarks, Kenji Kanasugi, director-general for Asian and Oceanian affairs at the Japanese Foreign Ministry, lodged an official complaint with the Korean Embassy in Tokyo, Kyodo News Agency reported. According to the report, Kenzi said Moon’s demand was unacceptable.

Despite Moon’s plan to use a two-track approach treating history issues separately from other issues with Japan, Abe’s response hints that bilateral ties might be in for a chilly period.

Speculation grew that Abe may not attend the upcoming Winter Olympic Games that Korea will host in Pyeongchang next month because of the feud.

Chief Cabinet Secretary Yoshihide Suga, the top spokesman of the Japanese government, said Thursday that Abe’s attendance had not been decided. He, however, said that Japan wants to consider the possibility that an official other than Abe will attend the sports event.

The United States, which has long urged its two key allies to settle their long-running feud over historical issues, will send Vice President Mike Pence as the head of the American delegation to the Olympics. North Korea will also send a delegation, and Abe could face pressure at home and abroad to use the event to help deal with the nuclear crisis.