‘The Chalk Man’ is a compelling debut

‘The Chalk Man’ is a compelling debut 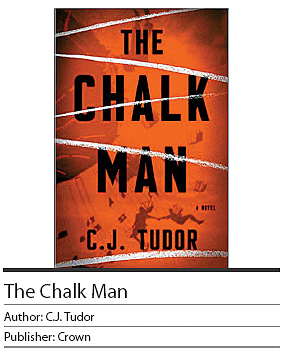 One’s childhood affects their development into adulthood, as C.J. Tudor fervently illustrates in her compelling debut, “The Chalk Man.” The discovery more than 30 years earlier of a dismembered teenage girl continues to reverberate in the lives of five childhood friends, affecting the path each has chosen as an adult.

On the surface, 12-year-old Eddie Adams, who serves as the narrator, and his friends, Gavin “Fat Gav,” “Metal” Mickey Cooper, David “Hoppo” Hopkins and Nicky Martin, the only girl, have an idyllic childhood roaming the small British village of Anderbury. It’s 1986 and the worst they do is draw chalk men as secret signals to each other outside their homes. But happiness, sadness, jealousy, guilt and abuse also punctuate their young lives, and those innocent chalk drawings take a sinister turn when Elisa Rendell’s body is found in the woods outside of town. Another death puts a pall over the group, whose friendship would eventually “splinter and crack.”

In 2016, Eddie is now a teacher, still living in his childhood home. He still meets up with Gavin and Hoppo, who never outgrew his nickname, but the get-togethers are more about having something to do than real friendship. Nicky hasn’t been heard from since she moved away decades ago after her vicar-father was hospitalized. The now-despised Mickey comes back for a visit and a proposal for Eddie. Mickey claims he knows who really killed Elisa, rather than the man who was blamed, and he wants Eddie’s help in writing a book. Mickey’s plan dredges up unpleasant memories and even nightmares for Eddie, and results in dire consequences.

Tudor delivers an assured debut that alternates between 1986 and 2016 with unpredictable twists. “The Chalk Man” fits well with other stories about troubled childhoods, such as Stephen King’s novella “Stand by Me.”

Tudor never misses a beat in showing each character as both a child and an adult while also exploring the environs of a small town. That Eddie never mentions Gavin’s last name adds to how children think. As adults, they realize just how little they knew about what really went on in their own homes as well as the murky motives of grown-ups. AP