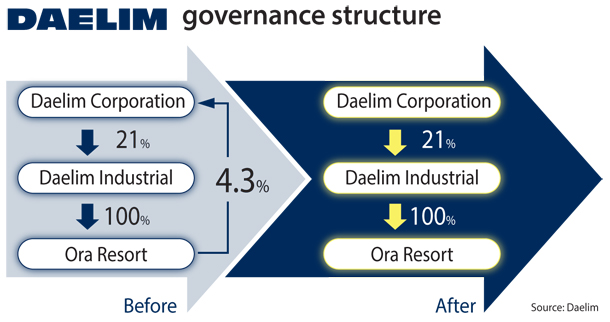 Daelim Group announced on Sunday that it will sell 4.32 percent of the share that the group’s resort and tourism company, Ora Resort, has in the de facto holding company, Daelim Corporation. Currently, the founding family controls Daelim Group, as Daelim Corporation owns a stake of 21 percent in its main construction arm, Daelim Industrial, which in return owns 100 percent of Ora Resort.

Daelim Group said the voluntary action will not only simplify its governance structure but also improve its management transparency, creating a foundation for more sustainable growth. It will also look into getting rid of the founding family’s stakes in its real estate management company A Plus D. Vice Chairman of Daelim Lee Hae-wook, a third-generation member of the founding family, owns 55 percent in the real estate consulting and management company with his teenage son, Lee Dong-hoon, who has 45 percent.

In 2010, Lee Hae-wook was promoted to vice chairman of Daelim Industrial. The real estate consulting and management firm is a classic case of a company being solely owned by the founding family. In 2016, 26.5 percent of the 4.4 billion won ($4.17 million) in revenue A Plus D made came from doing business with Daelim affiliates, mainly through managing Ora Resort’s hotel and resorts.

The construction conglomerate said this year it will no longer provide new works among its affiliates other than those that are necessary and approved under the law. Those whose business transactions are left under contract will be ended or changed.

Also, the construction company will be increasing its competitive bidding to allow more smaller businesses to participate and will choose from among them not by looking at the most “appropriate” bidding price while creating an independent committee to overlook any inside trade deals among the affiliates. To increase cooperation with smaller businesses, it will create a fund of 100 billion won to support smaller partners.

Daelim currently has 26 affiliates and ranks 18th among Korean businesses with assets worth 18.4 trillion won. However, Daelim has been under the scrutiny of the Korean government since 2016 when the heir and vice chairman, Lee Hae-wook, was found to have abused his driver. In addition, the government’s antitrust agency, the Korea Fair Trade Commission, conducted an investigation in September on allegations of unfair business practices.

This year, the government announced it would tighten its oversight on such business practices and on inheriting businesses through illegal means among the founding families.

“Reforming conglomerates is important in the sense of returning transparency and performance back to SMEs and the public,” President Moon Jae-in said last week during his New Year’s press briefing. “We will continue to eradicate [conglomerates’ practice] of giving extra work to affiliates through the unscrupulous execution of the law and will restrain families [of conglomerate owners] from expanding their governance through illegal means.”