Blue House describes plan to clean up the NIS

Blue House describes plan to clean up the NIS 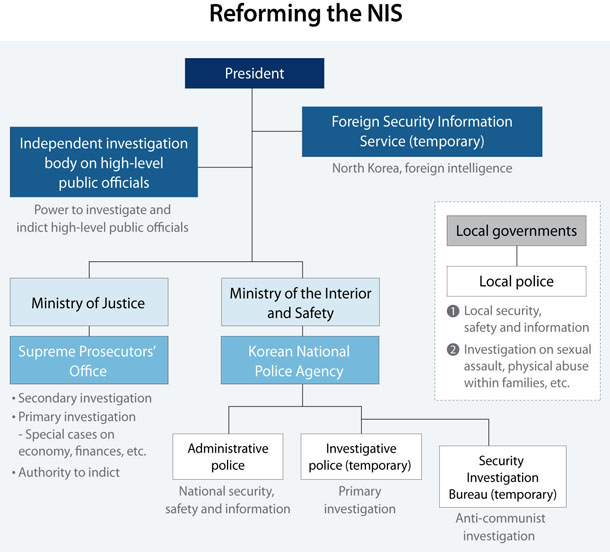 The Blue House announced Sunday its road map for reforms of the National Intelligence Service (NIS), police and prosecution that will grant more investigative power to the police.

“Under the current system, the prosecution has monopolized the power to investigate and indict, and the NIS has monopolized anti-communist investigation powers,” said Cho Kuk, senior presidential secretary for civil affairs, in a press conference at the Blue House on Sunday. “With the reforms, the Blue House envisions that anti-communist investigative power will be given to police ... and the police will also be granted the right to open and close first investigations on cases.”

Under the current system, the prosecution has the power to be involved in police investigation process, which means they can direct, stop, or take over investigations from police.

Even after the reforms, only prosecutors will have the right to seek court warrants for physical detention, searches and seizures, and arrests, as stated in the current Criminal Procedure Act. Prosecutors will additionally keep the authority to open investigations on cases involving finances, the economy and other sectors that require expertise.

Redistributing investigative authority between police and prosecutors was one of Moon Jae-in’s presidential campaign pledges and one of the 100 points in an agenda Moon announced in July.

The reforms also involve redistributing the authority to investigate anti-espionage cases from the NIS to the national police. The National Intelligence Service Act’s Article 3 stipulates that the NIS’s duties include collecting domestic security intelligence - related to communism, government subversion, espionage, terrorism and international criminal syndicates - as well as foreign intelligence.

“It was found that the NIS abused its authority by meddling in elections and spying on politicians, intellectuals, religious and entertainment figures,” Cho said. “The anti-communist investigation powers of the NIS will be taken over by police, where a separate department to focus on this will be established.”

Shortly after Moon took office in May, the NIS created a committee to investigate its own domestic political interference as part of a campaign to clean up its act. Thirteen particular cases were selected in July for internal probes, all of them occurring during the tenures of the last two conservative presidents, Lee Myung-bak and Park Geun-hye. They included the creation of a blacklist of artists and cultural figures who faced various kinds of oppression from the two administrations. Under the reform plan, the NIS is to focus instead on collecting foreign intelligence, including on North Korea.

“We are aware that granting these new authorities to police may mean another imbalance of power,” Cho said. “We will be careful to maintain the balance of power among government agencies and carry out the reforms in a way that does not infringe upon the rights of the people.”

“The division of police into two such bodies will ensure that high-ranking administrative police have no power to meddle in investigations,” Cho said. “This will ensure that the police will have checks and balances within its own system.”

The reforms also include the establishment of an independent body to investigate police, the prosecution and high-level public officials.

“The reason behind the impeachment scandal of the former president was because of a lack of balance of power among the authorities,” Cho said. “The Moon administration is trying to establish a system of checks and balances through this reform plan, which by the way is not something that the Blue House worked on independently but was created through discussions with political, civic and academic circles and various government agencies.”

The final say on details of the reforms will depend on “what the opposition and ruling party lawmakers agree upon together at the National Assembly,” said a Blue House official.