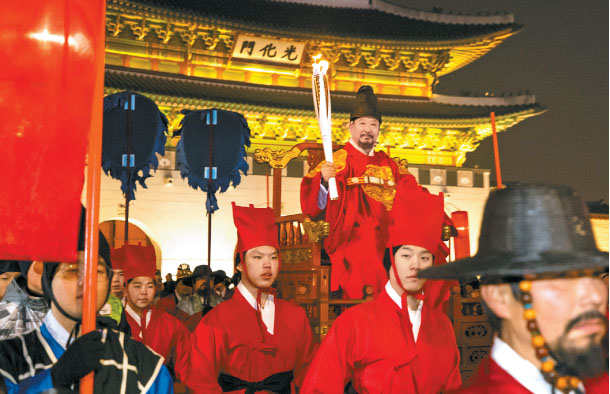 A replicated parade from the Joseon Dynasty (1392-1910) bears the torch for the PyeongChang Winter Olympics past Gwanghwamun in central Seoul Saturday night in an ongoing torch relay in Seoul from Saturday to Tuesday. [YONHAP]

The torch for the 2018 PyeongChang Winter Games arrived in Seoul on Saturday for a four-day relay through the capital.

The torch relay will be held through Tuesday in a course that spans 103 kilometers (64 miles), with some 600 torchbearers joining, according to officials at the Seoul Metropolitan Government.

It marks the first time in nearly 30 years for the capital city to hold a torch relay since the 1988 Summer Olympics held in Seoul. The 2018 Winter Games will kick off in PyeongChang, which lies 180 kilometers east of Seoul in Gangwon, on Feb. 9.

Seoul’s torch relay began at the Digital Magic Space in Sangam-dong at 8:35 a.m. Saturday, when the first bearer, freestyle skier Park Hee-jin, showed up amid a festive mood uplifted by drum beats and cheers from ordinary citizens.

“It is an honor to become the first torchbearer of Seoul. I’ll relay this enthusiasm to all Olympic athletes in PyeongCheong,” said Park, who competed at the 2014 Winter Olympics in Sochi, Russia.

Around 9 a.m., the torch was relayed to Korean football legend Cha Bum-kun in front of the Seoul World Cup Stadium.

“Korea’s football is now in a difficult time, but we have hope for the future. I’m honored to relay the Olympic torch, along with our country’s future football heroes,” said Cha, who ran with six young football players.

A Seoul citizen who identified himself as Kim, 60, said, “I came to personally witness the Olympic torch. I hope for a successful Olympics in PyeongChang. I also hope North Korean athletes come to PyeongChang for national unity.” 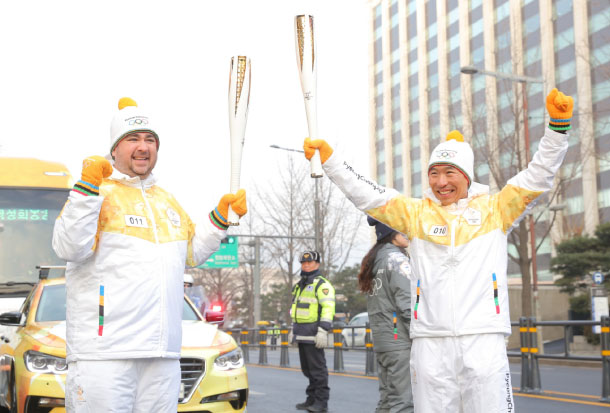 The Olympic torch carries a flame that was lit at the Temple of Hera in Greece in October. It arrived in Korea in November.

It toured major cities across the country, including Jeju, Busan, Gwangju, Daejeon and Incheon, before arriving in Seoul.

Immigrants and TV celebrities also participated in the torch relay.

During Sunday’s relay, the torch reached Seoul Olympic Stadium, the venue for the opening and closing ceremonies of the 1988 Seoul Summer Games. Some past and current Olympians had the honor of carrying the Olympic flame Sunday, according to the Korean Sport & Olympic Committee (KSOC).

After leaving Seoul, the torch will travel to the northern parts of Gyeonggi and head toward the host city for the Games.

The combined distance traveled by the torch will reach 2,018 kilometers, having been carried by around 7,500 torchbearers. The Olympics will run from Feb. 9-25.