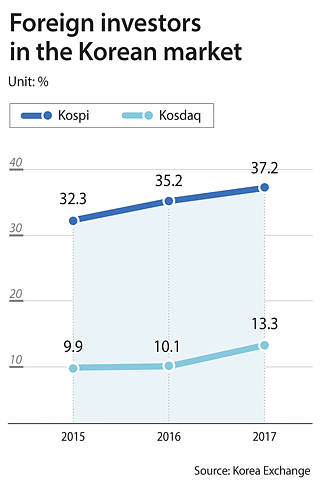 The industry that saw the most purchases by foreigners was the financial industry, with 5.16 trillion won, followed by the service industry with nearly 3 trillion won and chemicals with 1.68 trillion won.

The increased investment in financial stocks coincides with rising expectations of further interest rate hikes in response to tightening in the United States. Higher rates could translate to a bigger profit at banks since borrowers will have to pay more interest.

The Bank of Korea has already begun raising its key rate, bringing it from 1.25 percent to 1.5 percent in November. It was the first hike in six and a half years. 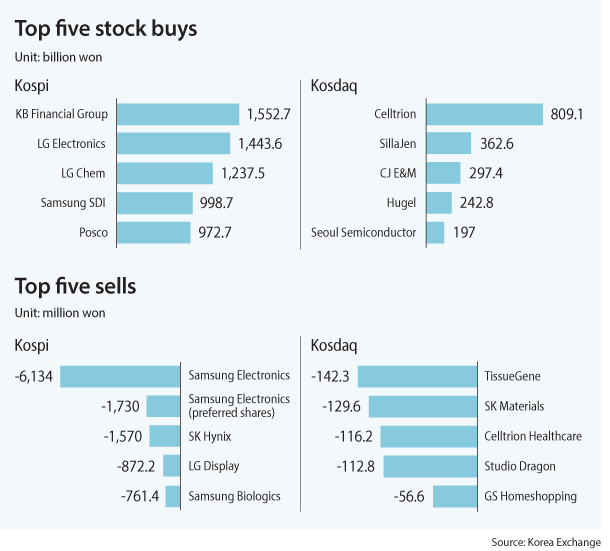 On the selling side, foreign investors offloaded Samsung Electronics shares the most, selling 6.13 trillion won followed by preferred shares of the same company worth 1.73 trillion won. The company experienced record profit last year on the back of high demand for its semiconductors.

SK Hynix, another semiconductor maker, ranked third with 1.57 trillion won worth of shares sold. The offloading in semiconductor shares was based largely on the projection that the market reached its peak last year, and demand will likely taper off this year.

On the Kosdaq, biopharmaceutical shares were popular. Celltrion, the biggest company on the bourse by market cap, ranked No. 1 among foreign investors, who purchased 809.1 billion won in the company’s stock, followed by another biopharmaceutical company, SillaJen, with 362.6 billion won.

“In the case of the Kosdaq, which saw the biggest net purchases [by foreign investors], the current momentum will likely continue thanks to government policies further boosting the Kosdaq,” an official at the Korea Exchange said, “such as easing regulations and more active investment by the state pension fund,” the index’s largest institutional investor.