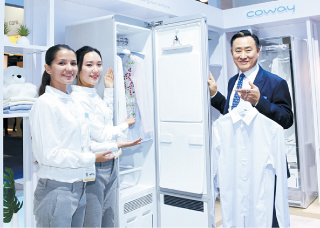 Coway, known for its strength in the water purifier rental market, showed off its next big product at the Consumer Electronics Show in Las Vegas: a clothing refreshing system for homes.

Coway showed its Fresh Wear Styling System at the world’s largest electronics and IT exhibition and predicted it will become a major cash cow for the company, along with sales and leases of water purifiers, air purifiers, bidets and mattresses.

While the new device is similar to LG Electronics’ Styler, released in 2011, Coway has differentiated its product by adding an air purifier at the bottom, according to a company spokesperson.

“Unlike LG’s Styler, our device can take care of the air quality of the whole room the device is located in,” the spokesperson said. “Considering the device is most likely to be located in a dressing room, the device can improve the state of other clothes hanging in the room.”

The Fresh Wear Styling System resembles a small closet and people hang clothes they have worn inside.

It is used to refresh dress coats or sweaters that people can’t wash every day. The device gets rid of smells and dust on clothes and steams out wrinkles.

The device is scheduled to be rolled out in Korea in the first half of this year. Currently only LG makes a closet-type clothes care device.

Coway hopes its device will evolve and develop new features in years to come.

The company also introduced a concept version of the device dubbed the Fresh Wear Styling System 2 at the Las Vegas show.

When an owner stands in front of the closet-like device, a camera takes a picture of him or her and recommends an outfit considering the latest fashion trends, the weather and the person’s looks. The device was developed in partnership with Amazon and the outfits recommended will be products sold at the retailer’s online commerce site. It works with Amazon’s artificial intelligence platform Alexa.

As a concept product, it is unclear when that device will actually be sold.

During the first quarter of this year, Coway is releasing an air purifier dubbed Airmega embedded with Amazon’s Internet of Things technology-based Dash Replenishment Service in the U.S. market.

A sensor attached to the purifier monitors filters’ life cycles in real-time and automatically orders new filters through Amazon. The purifier was introduced at last year’s Consumer Electronics Show.

Amazon is not the sole tech partner for Coway. The company also showed off in Las Vegas an air purifier dubbed Coway Tower that works with Apple’s artificial intelligence assistant Siri. That product will be released in the Chinese market this month and later in the U.S. market.

“We have introduced life care solutions by upgrading consumer electronics with technology and innovation at the Consumer Electronics Show for the past three years,” said Lee Hae-sun, CEO of Coway. “We believe the fresh wear styling system will be a revolutionary product that can create new market trends.”