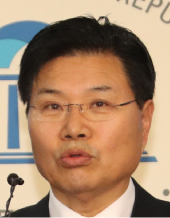 The prosecution on Monday raided a school foundation headed by a senior opposition lawmaker over the suspicion that he had received illegal political donations in return for nominations.

Rep. Hong Moon-jong, a fourth-term lawmaker of the main opposition Liberty Korea Party, was accused of taking hundreds of millions of won from politicians who wanted to run in the 2014 local elections.

At the time, Hong was an influential leader of the Saenuri Party, the predecessor of the Liberty Korea Party. Hong was the secretary general of the then-ruling party and a close associate of then-President Park Geun-hye.

According to the prosecution, Hong allegedly received donations to his Kyungmin School Foundation, which operates Kyungmin University in Uijeongbu, northern Gyeonggi. The Seoul Central District Prosecutors’ Office raided the foundation’s office in Uijeongbu and secured accounting documents and electronic data.

Hong’s father, former lawmaker Hong Woo-joon, established the foundation in 1968 and Hong has been serving as the chairman of the board of directors since 1997.

It was not the first time Hong faced an investigation by the prosecution. In 2015, Hong was probed by the prosecutors as a suspect in a major graft scandal involving former chairman of Keangnam Enterprises Sung Won-jong.

Top members of the Park administration, including the prime minister, presidential chief of staff and political allies, including Hong, were sucked into the scandal after a list of bribes allegedly paid by Sung was found in his pocket after he committed suicide. The piece of paper contained the names of politicians and some amounts of money next to them.

Sung, a construction tycoon and former lawmaker, was found hanging by a necktie from a tree branch at an entrance to Mount Bukhan while he was being investigated about an overseas resources project of the Lee Myung-bak administration.

Based on the memo, Hong was accused of receiving 200 million won ($188,000) before the 2012 presidential election. At the time, he was the organization chief of Park’s campaign.

The prosecution, however, did not indict Hong. At the time, all politicians who were close to Park were cleared of the charges.

Hong Joon-pyo, the current chairman of the Liberty Korea Party and a critic of Park loyalists, was the only politician on the alleged bribery list to face an indictment.

Hong Moon-jong also has a record of violating election law. Hong was found guilty of spreading false rumors before the legislative election in 2004. He was ordered to pay 2.5 million won and lost his right to run for public office. Six years later, he received a presidential pardon by Lee.

Hong was also suspected of influencing the recruitment process of the World Taekwondo Headquarters when he served as its head for three years since June 2013. The organization was raided twice in April and July last year over employment corruption and embezzlement.