Pyongyang to send 140 artistes to the Olympics

Pyongyang to send 140 artistes to the Olympics 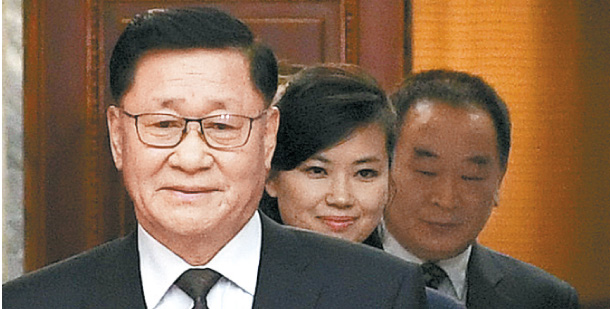 North Korean representatives arrive at Tongilgak, a North Korea-controlled building on the northern side of the Panmunjom truce village, on Monday. From the front are Kwon Hyok-bong, director of the Arts and Performance Bureau in North Korea’s Culture Ministry; Hyon Song-wol, leader of a North Korean orchestra; and An Jong-ho, a stage manager. [UNIFICATION MINISTRY]

A delegation of 140 members from North Korea’s Samjiyon Orchestra will arrive in South Korea next month and take to stages in both Seoul and Gangneung, one of three venues in Gangwon that will host the Winter Games.

Agreement was reached by representatives of Seoul and Pyongyang in a discussion near the border Monday. The second round of the most recent inter-Korean dialogue came after both sides agreed on Jan. 9, during the countries’ first high-level meeting in over two years, to hammer out details of North Korea’s participation in the Winter Games through a series of talks among representatives of lower ranks.

The artistes will be part of a larger North Korean delegation that will include athletes, cheerleaders, journalists, high-level government officials and taekwondo demonstrators. The sizes of the other groups have yet to be negotiated.

Monday’s discussion was held on Pyongyang’s request. The regime said last Saturday it wanted to specifically converse about its performing arts group in a “working-level talk” format, which has lower diplomatic significance than a “working-level meeting” format. Representatives from Seoul and Pyongyang convened at Tongilgak, a North Korea-controlled building on the northern side of Panmunjom, which straddles the border.

North Korea’s interlocutors included Kwon Hyok-bong, director of the Arts and Performance Bureau in North Korea’s Culture Ministry; Hyon Song-wol, leader of a North Korean orchestra; Kim Sun-ho, an official with the orchestra in charge of administrative tasks; An Jong-ho, a stage manager; and an unidentified "performance expert," according to the Unification Ministry.

North Korea, which didn’t respond to that specific request over the past weekend, finally accepted it on Monday and suggested they meet on Wednesday at Peace House. The regime said it would send a three-member delegation as well, led by Jon Jong-su, vice chairman of the Committee for the Peaceful Reunification of the Country of the Democratic People’s Republic of Korea, which handles inter-Korean relations within the North Korean government. The two sides will convene at 10 a.m. Wednesday.