UAE controversy swept under the carpet

UAE controversy swept under the carpet 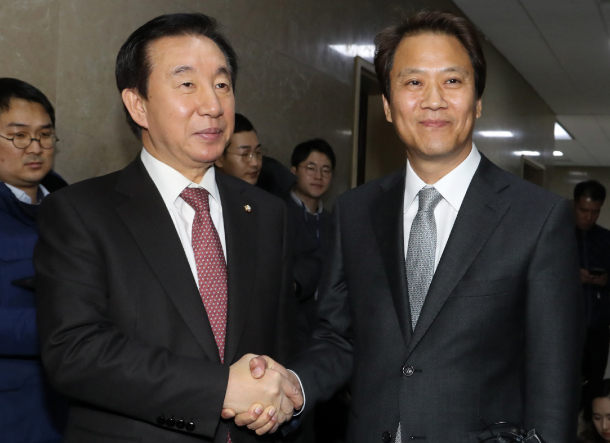 The Blue House has asked for the ruling and opposition parties’ cooperation in sweeping under the rug a diplomatic problem between Korea and the United Arab Emirates (UAE), senior lawmakers said Monday.

Presidential Chief of Staff Im Jong-seok met with floor leaders of the ruling and opposition parties on Sunday. Reps. Woo Won-shik of the ruling Democratic Party, Kim Dong-cheol of the People’s Party, Oh Shin-hwan of the Bareun Party and Roh Hoe-chan of the Justice Party met with Im for about two hours at a restaurant in downtown Seoul. Han Byung-do, senior presidential secretary for political affairs, also attended the meeting.

“During our meeting, Im gave us an explanation within a certain scope in order to end a political debate over the UAE issue,” Woo said Monday during a Supreme Council meeting of the Democratic Party. “Taking into account the sensitivity of the issue, linked to our national interests, we agreed to wait and see how the situation goes and hold additional discussions if necessary.”

Over the past month, Im’s abrupt visit to the UAE in December provoked many questions and a lot of speculation. Politicians and government sources said relations between Seoul and Abu Dhabi were in jeopardy because the Moon Jae-in administration attempted to change a secret military pact Korea signed in 2009 as part of a deal to win a $18.6 billion nuclear plant project in the UAE. They suspected that Moon sent Im as special envoy to a meeting with Sheikh Mohammed bin Zayed bin Sultan Al Nahyan, the crown prince of Abu Dhabi, in order to calm the diplomatic row.

A former defense minister also fueled the controversy. In an exclusive interview with the JoongAng Ilbo, Kim Tae-young, who served as the Lee Myung-bak government’s defense minister from September 2009 to December 2010, admitted that there was a secret military pact that guarantees the Korean military’s automatic intervention in an emergency in the UAE.

Last week, the UAE sent Khaldoon Al Mubarak, chairman of the Executive Affairs Authority of Abu Dhabi, as a special envoy to Korea. Following his meetings with Moon and Im, the Blue House said the two countries agreed to expand their strategic partnership.

The Blue House, however, refused to confirm further details, such as the purposes of Im’s visit to the UAE and Al Mubarak’s visit to Korea or if there was any secret military pact between the two countries.

During a New Year’s press conference on Wednesday, Moon was forced to address the issue and he gave a tacit admission to the speculation surrounding the secret military deal.

“If there is a flaw in an undisclosed agreement or MOU, we will consult with the UAE to amend it over time,” Moon said. “I believe when an appropriate time comes, we can make them public.”

Moon, however, did not admit or deny speculation that the two countries’ relations were affected by the secret military pact.

Im’s meetings with floor leaders of the ruling and opposition parties on Friday and Sunday appeared to be an attempt to put an end to the public airing of the controversy. On Monday, opposition lawmakers seemed content with Im’s explanation.

“From the perspective of national interests, the People’s Party hopes that the Korea-UAE relations will develop into a more comprehensive partnership,” Rep. Kim Dong-cheol, its floor leader, said. “We want the Moon administration to act more prudently from now on, rather than seeking understanding and cooperation of the opposition parties and the public.”

Rep. Roh of the Justice Party said he learned that some speculation was completely wrong. “I was able to confirm that some suspicions such as the UAE’s threats to cut ties with Korea, stop construction of the nuclear plant or scrap the contract were groundless,” he said. “I was also informed that the two countries are in the process of amending the [military] pact that Moon talked about.”

On Friday, Im also met with the floor leader of the Liberty Korea Party, Rep. Kim Sung-tae. After the meeting, Im said he and Kim agreed that the government, the National Assembly and the opposition parties will work together to win more overseas nuclear plant deals.

“The government and the largest opposition party agreed to end the UAE controversy for the sake of the national interests and confidence,” Kim also said. The two sides also agreed to uphold the continuity of diplomatic decisions made by previous administrations and strengthen cooperation between the government and the opposition party in state affairs.