As with many rising young athletes, next month’s PyeongChang Winter Olympics will mark a fresh start for cross-country skier Kim Magnus. 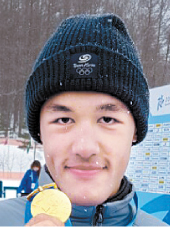 For Kim - who won gold, silver and bronze medals at the 2017 Sapporo Asian Winter Games - the first Winter Olympics in Korea will also be his first Olympiad as an adult.

Kim’s given name, Magnus, admittedly comes across as unconventional, especially in a country that is deeply homogeneous. The child of a Norwegian father and a Korean mother, Kim used to hold dual citizenship in both his parents’ countries. But in 2015, the skier announced he would represent his mother’s land in major events, including at PyeongChang.

“As a Korean, I have patriotism and I thought it would be meaningful [to represent Korea] since the PyeongChang Olympics will be held in Korea,” Kim said back in 2015, explaining his decision to represent his mother’s homeland.

Korea is still a relative newcomer when it comes to cross-country skiing. The nation has competed at international cross-country events since the Squaw Valley Winter Olympics in 1960 but trails far behind leading European nations.

But in 2016, Kim became the first skier representing Korea to win a gold medal at a major international event, winning two golds and one silver at the 2016 Youth Winter Olympics, giving a major confidence boost to the country for its future snow competitions.

In February last year, the 19-year-old went on to capture three medals, including a gold in the 1.4-kilometer (0.86-mile) individual sprint classic, at the Sapporo Asian Winter Games in Japan. The Busan native, who speaks in a fluent Gyeongsang dialect, became an instant star athlete among the Korean national squad and was chosen as the flag bearer for the national team when returning home.

“I don’t necessarily think I’ve gotten closer to an Olympic medal after the Asian Games, but it’s all part of the process,” said Kim last February after arriving from Sapporo.

“It was an unbelievable feeling to accomplish something I’d wanted for a long time. And gaining confidence was huge,” the skier said.