When North and South played together

When North and South played together

With the growing possibility of North and South Korea fielding a unified women’s ice hockey team for the upcoming Winter Olympics, attention is turning to previous instances where the estranged countries played together on the international field. 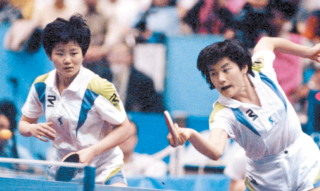 North and South Korean athletes have only competed together twice in international competitions: at the World Table Tennis Championship in February 1991 and FIFA World Youth Championship in July that year.

The table tennis match was particularly sensational. The unified women’s team bested the supposedly “unbeatable” Chinese team and won gold, ending China’s nine-year streak at the World Championship. The moment was even dramatized in the 2012 film “As One.”

“On our bus rides, we got to talk a lot,” recalled Hyun Jung-hwa, the South Korean leader of the team. Although the athletes from both sides all spoke Korean, they had to overcome communication barriers because they used different words to describe moves like serve and smash.

“At first, we were negative about having a unified team,” Hyun told the JoongAng Ilbo, “because we were worried that South Korean players might not be able to compete in events. In table tennis, each country is limited to five players, but the International Table Tennis Federation was very considerate, allowing us to add five more to the original entry.”


At the end of the tournament, Hyun described a mix of emotions from the Korean athletes.

“Players from the North and South cried,” the 48-year-old table tennis legend recalled. “I gave Bun-hui [Hyun’s North Korean counterpart] a gold ring as a present and told her not to forget the memories of the unified team.”

The table tennis event proved that the two Koreas could field a unified team, and later that year, they tried again with men’s football, sending a team to the 1991 FIFA World Youth Championship in July. That team, led by South Korea’s Cho Jin-ho and North Korea’s Choi Chol, also exceeded expectations, advancing to the quarterfinals.

Unlike table tennis, where both sides requested more players, the football team split the roster equally. Entry was limited to 18 players, so each side sent nine. A majority of the North Koreans were assigned to offensive positions and South Koreans to defense.

The team trained for one week in Pyongyang and one week in Seoul before spending their final two weeks in Portugal, where the tournament took place. Like the table tennis team, the football team’s parting was emotional. There was reportedly a lot of weeping when the song “Our Wish is Unification” played on the bus.

Unlike the World Table Tennis Championship and FIFA World Youth Championship in 1991, fielding a unified women’s ice hockey team for the PyeongChang Winter Olympics will be more difficult. While South Korea earned a spot by virtue of its status as a host country, North Korea did not qualify for the event. Since the final entry is limited to 23 players, the addition of three to eight North Korean players could mean the elimination of some South Korean players.

And even if the International Olympic Committee allows the two countries to have more than 23 players on the team, only 22 will be allowed on the ice per game.

Still, the biggest problem facing the women’s ice hockey team is lack of communication. The players still have not received any word on the matter, relying on news reports for updates.

“I heard about it [a unified team] on our way back to Korea from offseason training in the United States on the 19th last month,” said Han Su-jin, a forward on the South Korean women’s ice hockey team.

Han expressed her fear of some players losing their spots after training for five to 10 years and only receiving pay of 60,000 won ($56.40) a day from the national team. Some Koreans have taken their opposition of a unified team to the Blue House, positing a petition on the presidential office’s website.

Hyun emphasized that a unified team could turn into a “political show.” Although the table tennis player believes that a unified team is needed for future generations, it will only make matters more difficult if players are forced to compete as one.

“It is sad that there was lack of communication with ice hockey players,” said Ryu Seung-min, a Korean member of the IOC who will attend a meeting on Jan. 20 to discuss the possibility of a unified team. “Players’ opinions should be respected, and the government and Korean Olympic Committee promise to minimize the damage to players.”