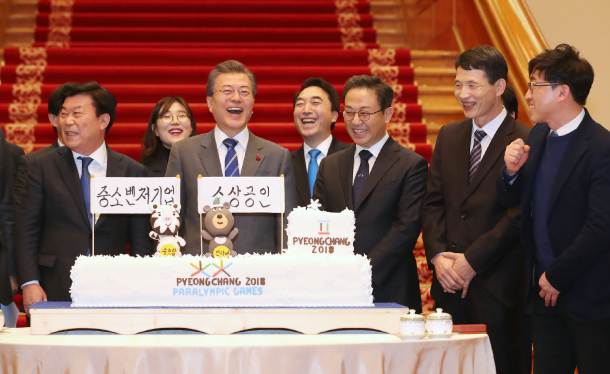 President Moon Jae-in, second from left in front row, and representatives from small and medium-sized businesses wish for a successful PyeongChang Winter Olympics with a cake made by a mom-and-pop bakery at the Blue House on Tuesday. [YONHAP]

In his first meeting with representatives of small and medium-sized businesses on Tuesday, President Moon Jae-in once again emphasized the necessity of a higher minimum wage and promised policies that would help business owners cover higher labor costs as a result of a minimum wage increase that went into effect at the start of the year.

The support, he said, includes a maximum 30 percent cut on employment insurance that companies have to pay the government. The reduction will apply to small businesses with less than 30 employees.

“The government considers the higher minimum wage as the most important project in the beginning of the year,” Moon said during his meeting with 26 representatives of SMEs, start-ups and traditional markets. “The higher minimum wage is necessary to resolve widening polarization, allow low-income workers to live humanely and achieve income-led growth.”

Korea’s gross national income per capita is set to reach $30,000 this year, and Moon called it a “burden we all have to share.” Looking back on various policy changes in Korean society, there have been difficulties that followed, he said, but those changes have contributed to improving the economy and quality of life.

“With a higher minimum wage, consumption will grow and the domestic economy will expand,” Moon said. “It will improve our economy and eventually help SMEs and the self-employed.”

“The government will move quickly to minimize the effect of a higher minimum wage so that restaurants won’t have to raise prices on customers,” Moon said.

Restaurants have recently been raising prices to accommodate the higher minimum wage while maintaining staff.

During a cabinet meeting earlier in the day, Moon urged his government to actively promote its policies so that small businesses can make use of the financial support.

“In a situation where our country has the highest ratio of low-wage workers among OECD countries, at 23.5 percent, and a widening wage gap, a [higher] minimum wage not only allows allowing workers to live a life of minimum dignity,” Moon said, “but also is the road toward achieving income-led growth by increasing household income and expanding domestic consumption.”

The invitation extended to owners of SMEs was the first since Moon was inaugurated last May. The meeting was initially scheduled for July, but Moon opted to meet with heads of Korean conglomerates instead.