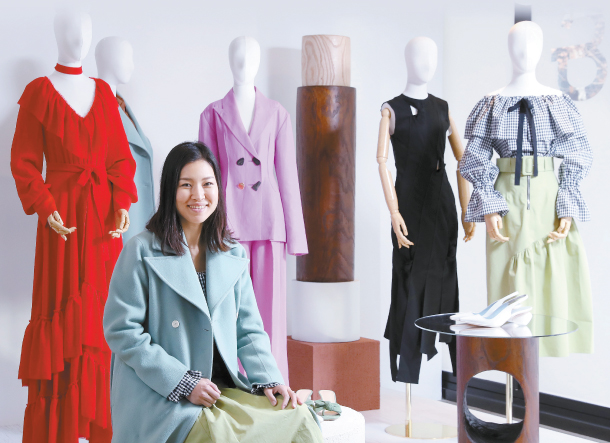 Fashion Designer Pyo Ji-young, who is behind the London-based label Rejina Pyo, got to present a part of her collection at the Beaker Flagship Store in Hannam-dong, central Seoul, after winning a 2017 SFDF Award. [WOO SANG-JO]

Fashion in London is experimental. More than any of the other fashion meccas, the city most prominently shows designs that break away from customs while challenging what’s in vogue. But in a city where every designer is focused on being unconventional, rising Korean fashion designer Pyo Ji-young has made a name for herself by pursuing what she calls “common womenswear.” Her namesake label Rejina Pyo seeks to design clothes that are desirable for the ordinary women around her. This “ordinary philosophy” has proven to be a hit with both everyday women and fashion-sensitive celebrities. Last year, she was nominated in the British Emerging Talent’s Womenswear category at the 2017 British Fashion Awards, and at home, she was named one of the two winners of the 2017 Samsung Fashion & Design Fund (SFDF) Awards. Currently, her designs are sold at 120 online and offline stores including Neiman Marcus, Harvey Nichols, Net-A-Porter and many others.

“Being ordinary is my unique identity,” says the 35-year-old designer.

After launching her label in 2014, she finally made her London Fashion Week debut last September, where she hit it big. Her first runway show looked like a London street, as 25 ordinary citizens of various heights and sizes walked down the runway. The extremely ordinary show managed to attract the spotlight and allowed Pyo to make a successful debut.

To hear more about her label, the JoongAng Ilbo, an affiliate of the Korea JoongAng Daily, recently sat down with the designer for an interview in Seoul. The following are edited excerpts. 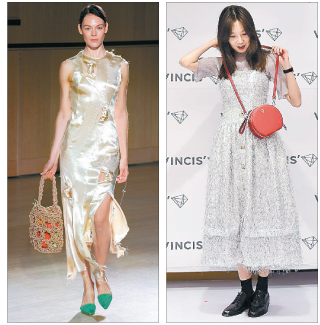 Above are two popular Rejina Pyo designs, including the “silver dress,” which became popular in Korea after being worn by actress Gong Hyo-jin, right. [REJINA PYO]

Was it your tactic to put on a surprise show for your London Fashion Week debut by having ordinary citizens as models?

Not at all. I just tried it out because it fit well with the show’s concept. That collection was inspired by a photography project “The Brown Sisters” by Nicolas Nixon. The work is composed of photographs of his wife and her three sisters that Nixon took every year for about 28 years. The work simply shows four ordinary women, and I could substitute myself, my sister and my mother. The work plainly shows the life of women. The world is filled with ordinary women, and how could I make clothes for them and only use skinny 18-year-old models? I believed that these women would understand the concept of my collection.

How would you describe “Rejina Pyo style”?

It looks indifferent but elegant and feminine at the same time. The trend these days is being genderless, but [it’s not my style] to dress women like men. Also, Rejina Pyo is far from the street punk style you see often in London. I want to design clothes that my friends tell me are gorgeous, rather than the glamorous dresses that celebrities like to wear. In fact, after the London show, I asked the models - the ordinary citizens - if they wanted me to pay them for the catwalk or give them the clothes they wore. They all said they wanted the clothes. 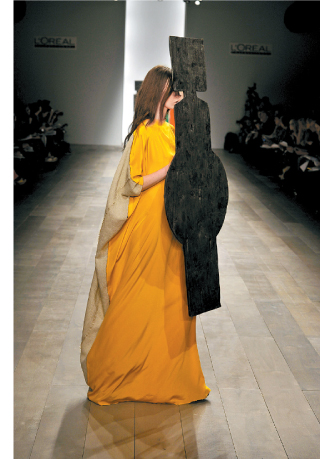 How did you come up with such a concept in the first place?

The idea came from my closest female companion, my mother. My mother was a dressmaker and I really admired her independence. By looking at my mother, I wanted to make clothes for the independent women of today. Apparently, the apple doesn’t fall far from the tree. I too, like my mother, liked using sewing machines since I was young and made my own little dress using leftover fabrics. I studied textile art at Hongik University, and after finishing school I worked as a designer at a large company in Korea. But I couldn’t stop thinking about why Korea is obsessed with copying collections from abroad. I was often enraptured while talking to a pattern maker at the company about new designs ideas we had in mind. That is why I decided to leave the country and study fashion at Central Saint Martins in London in 2007.

Did you adjust well in London?

When I think back, the school didn’t really “teach” me. But it helped me to discover something that is mine. The teachers don’t tell students what they would do well or what their style is, but help students to better realize their style and concepts that they’ve already discovered on their own. Because I wasn’t fluent in English, it was really difficult for me to express my thoughts in words. But I studied really hard because I didn’t want to go back home. To stay, I needed a working visa by landing a job as soon as I graduated. Studying under Prof. Louise Wilson really helped. It was an honor. 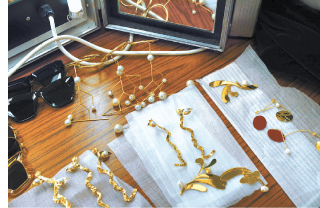 What kind of teacher was she?

She never told me “this is the trend.” Rather, she always encouraged me to put all my effort in what I can do best and what I like. Honestly, at that time, it didn’t really touch my heart, but afterwards, whenever I am at a crossroads of life, I think about what she said. Her guidance really helped me when launching my label. I was concerned whether I should also do digital printing like Mary Katrantzou or present a punk-rock look since I’m in London. But I came to a conclusion that I can’t do what is not me, what I don’t like.

You founded the label not long after graduating from college. How did it happen so fast?

It wasn’t planned. Here’s a story. Everything started from my graduation project. Usually, a student gets to create several mini collections. I received a high grade for this, so I got the opportunity to collaborate with WeekDay, which is one of the fashion brands under H&M. After that, with the help from Prof. Wilson, I landed a job at Roksanda Ilincic. If my story ended here, I would’ve just worked as a designer of a fashion brand. But with my graduation project, I became the winner of the Nefkens Fashion Award 2012 and got the opportunity to have a presentation in the Museum Boijmans Van Beuningen, a historic museum in Rotterdam, Netherlands. That experience changed my mind. The museum was so big and it seemed impossible to fill the space by working on it only during the weekends when I don’t work. I wanted to do it right, so I decided to quit and launch my own label.

It was difficult to discover something new, as there are so many great graduates from my school before me. Because I didn’t major in fashion as an undergraduate, I researched in the field of fine arts, and tried to look for an idea to use in fashion. Then I came across the works of artist Lee Jae-hyo, whose sculptures often involve burnt black wood. I thought about how to incorporate the feeling of burnt wood into garments. I emailed him asking for help about burning wood and met up with him in Korea. Perhaps because we went to the same university, he helped me a lot, teaching me what kind of wood burns best and how to burn them so that they don’t turn into charcoal. While making dresses for my graduation project, I used the burning technique to attach two fabrics - silk and linen - together rather than stitching. Depending on the temperature of the fire, the color of the fabrics changed naturally. I wanted to create garments that have a story to tell, not just pretty clothing.

Although you don’t have a showroom in Korea, Rejina Pyo is well known in here as well. Why do you think that is?

I don’t have a publicist here, but luckily, celebrities have been wearing my designs after purchasing them, or contacting me through their stylists. The so-called fashion people today are pretty active on social media like Instagram so they know what’s hot outside the country and want to wear [the clothing] even though there has not been any PR. I was also connected to stores in other countries like the United States, Japan and Hong Kong in a similar way. Moreover, stylists and online shopping sites like Net-A-Porter really make an effort to discover small but unique labels. They compete to be the first ones to discover such brands, and thankfully, doors open for rising designers like myself. In Korea, the actress Gong Hyo-jin made my dresses a hit. She wore my silver dress once, and now, copies of that dress are being sold in nearly every store in Dongdaemun.

Your name is quite well-known in the publishing community in London. How did that happen?

My husband is an Irish chef. He used to work as a TV producer but now writes books about cooking and food. In 2015, he and I wrote a book together titled “Our Korean Kitchen.” The book became the winner of the Observer Food Monthly’s Best New Cookbook for 2016, so my name naturally became quite known.

It seems like you are on a roll, aren’t you?

Not at all. After launching my label in 2014 and until I got into London Fashion Week last year, I struggled a lot. My sales agent even told me that my styles won’t sell and that I should just give up the label. I also wondered whether I should go back to working for a brand. But I didn’t want to leave any regrets behind. So for the 2017 Spring and Summer collection, I worked on [making] a collection that I’ve always wanted to do. That’s how I created the popular yellow puff sleeve dress and the silver dress. I finally showed the “Rejina Pyo style” that I had been talking about through that collection, and that really appealed to people.

What’s your plan after winning the SFDF Awards?

I was so busy doing four collections a year and also designing my own accessories and shoes. Since the prize money from the SFDF Awards secures the cost for the collections in the next year, I plan to open a small show room in London. Here, people who have only heard about Rejina Pyo can visit and experience what I mean by Rejina Pyo style. Because my clothes are only sold in select stores or online, it’s been somewhat difficult for consumers to really get to know the brand.