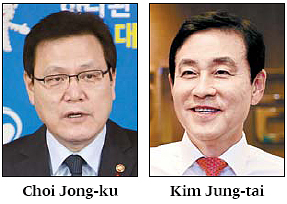 Hana Financial Group decided to continue with its leadership appointment procedure on Tuesday, despite increasing pressure from the government to drop incumbent Chairman Kim Jung-tai due to his connections to Choi Soon-sil.

The Financial Supervisory Service (FSS) and Financial Services Commission (FSC) have expressed their disapproving stance on the group’s move to re-elect Kim because of his alleged link with Choi.

The FSS requested the postponement of the nomination process on Monday given that an inspection about allegedly unfair loan provisions is underway.

A spokesperson at Hana, however, said that the process of selecting shortlisted candidates will go as scheduled.

“We will announce shortlisted candidates today as planned,” the spokesperson at Hana Financial Group said.

The group had earlier said that the final interview is scheduled for Jan. 22, but it is now uncertain if it will be able to follow through with the time frame.

“Still, we don’t know if the next procedure will take place as announced before,” explained the spokesperson.

The FSS has been looking into whether KEB Hana Bank offered exceptionally low interest rate loans to i-KAIST, a private IT solutions company. The probe will also verify whether the chairman was involved in the decision.

The now-defunct company gained a lot of support and media attention under the former Park Guen-hye administration. It was headed by aides and figures connected to Choi, the President Park’s confidante accused of acting as a “shadow president.”

Hana Bank is also on a watch list over its recruitment process as the FSS is in the process of investigating major commercial banks’ hiring practices.

The heads of the financial regulators voiced criticism over the group considering the reappointment of the chief even though he is mired in controversy.

“Financial holding companies don’t usually have top shareholders with large stakes, so the current CEOs tend to unfairly use their influences to be re-elected,” Choi Jong-ku, chairman of the FSC, said in December.

The FSC released a set of reform measures on Monday suggesting that more specific criteria and a transparent screening system should be used to appoint the head of a financial group.

But Choi backtracked in an apparent attempt to not be seen as excessively overstepping private companies’ decision making process.

“The FSS was looking into whether Hana is involved with any allegations and suggested a delay in the process until the investigation ends,” Choi said on Monday.

“Hana Financial Group’s nomination committee will decide whether to accept the suggestion.”