HMM sues its former chair for breach of duty

HMM sues its former chair for breach of duty 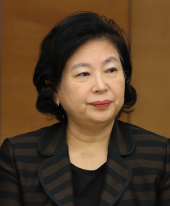 According to the shipping line on Tuesday, it sued five executives including Hyundai Group Chairwoman Hyun Jeong-eun and former CEOs of HMM for agreeing to an unfair deal when selling shares of Hyundai Logistics in 2014. The case was submitted to the Seoul Central District Court the previous day.

While HMM was the largest shareholder for the logistics company, with a 47.7 percent share, another Hyundai affiliate Hyundai Global owned 24.4 percent and Hyun and her family owned 13.4 percent. As HMM was struggling financially, they decided to sell their shares through a special purpose corporation (SPC).

The SPC then sold Hyundai Logistics to Lotte in 2016.

HMM, however, claims the terms of the deal were unfairly harsh on the shipping company. For instance, HMM alone was obligated to guarantee 16.2 billion won ($15.2 million) worth of operating profits from inland and short sea logistics for Hyundai Logistics, which now operates as Lotte Global Logistics. This means if the logistics company fails to earn 16.2 billion won of profit, HMM has to pay the difference.

HMM also had to invest about 109.4 billion won in subordinated debt to raise the sales price of the logistics company, the shipping line said. Subordinated debt is riskier than unsubordinated debt, as it is paid after all other corporate debts and loans are repaid if the borrower defaults.

“It was quite evident HMM’s investment could not be recovered but they still agreed to the terms,” said Jang Jin-seok, executive vice president of HMM’s compliance management office at a press briefing held Tuesday at HMM headquarters in Seoul. “Lotte also claims the contract guarantees 16.2 billion won in operating profit for five consecutive years, but such a decision cannot be made through board of director meetings.”

Jang said HMM is subject to continued losses from the unfair deal and decision makers need to take responsibility for their breach of duty.

HMM’s legal action took on speed as Lotte Global Logistics filed suit against HMM for not paying up the promised amount of money to reach 16.2 billion won of operating profit.

“The contract with Lotte remains effective for the time being, however, whether HMM will be subject to the contract’s requirements will be decided based on how the new criminal case proceeds,” a spokesperson from HMM said.

HMM used to be affiliated with Hyundai Group, however the two parted ways in the second half of 2016 after local shippers suffered a liquidity crunch that led to Korea’s No.1 shipping line Hanjin Shipping going bankrupt. HMM is currently managed by creditors including the Korea Development Bank.

The Korea Development Bank said it was not involved in HMM’s decision to sue Hyundai Group executives, though a bank official said the bank was aware of the situation.

A spokesperson from Hyundai Group said HMM is blaming its mother company for trying to save a dying company by injecting cash and selling all the assets it could.