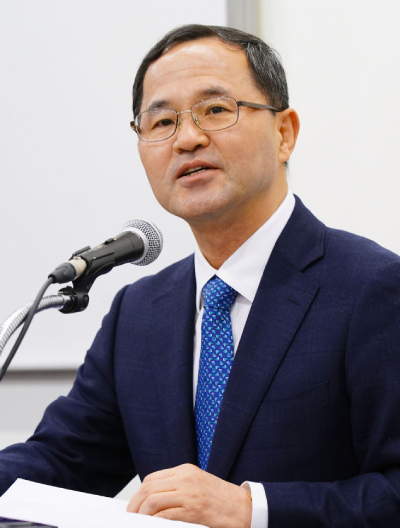 In a regulatory filing last month, the shipbuilder projected 2018 to be a slow year, projecting 5.1 trillion won in sales - down 35.4 percent from 2017 - and an operating loss of 240 billion won.

However, Nam expressed confidence that the company would shift to profit in 2019 during his first meeting with reporters since taking over the ailing shipbuilder at the end of last year.

“With the market showing signs of improvement, we expect to secure deals worth $8.2 billion this year and generate 7 trillion won in sales next year,” he said during a news conference at the Korea Chamber of Commerce and Industry’s headquarters in central Seoul.

Among the $8.2 billion, the company expects $5.5 billion to come from shipbuilding and the rest from oil rig construction. Last year, Samsung Heavy Industries signed deals worth $6.9 billion.

The low revenue estimates stem from an order drought in 2015 and 2016 that pulled down the entire shipbuilding industry to its worst recession in decades. Since payments are not made until an order is fulfilled, the fruit from signed deals could take years to appear.

Nam said the market expects increased demand this year, particularly for eco-friendly ships, since new International Maritime Organization regulations will be applied to vessels worldwide starting from 2019. The rules will cap emissions of sulfur oxides.

“For vessels that are more than 15 years old, attaching new devices on them is more expensive than purchasing a new ship,” he said, “and the number of such outdated vessels account for more than half of those operating today.”

Another positive indicator is revived demand for oil rigs, which has been rising on the back of higher oil prices this year. Since 2011, the company has built seven offshore plants.

An immediate task for Samsung Heavy Industries is improving its financials this year. The plan is to secure 1.5 trillion won by issuing new stocks, which the company says it will finish by May. Samsung Heavy has already acquired 1.1 trillion won through the same method in 2016.

“We secured the goal amount in 2016 when the market situation was much worse,” Nam said, “so I’m pretty confident we will succeed this year now that projections for the market are positive.”

Internally, the company has been making drastic cuts to cover slow sales.

In its latest corporate reshuffle last month, it laid off 30 percent of its top management. Executives have also been returning portions of their wages since 2016.