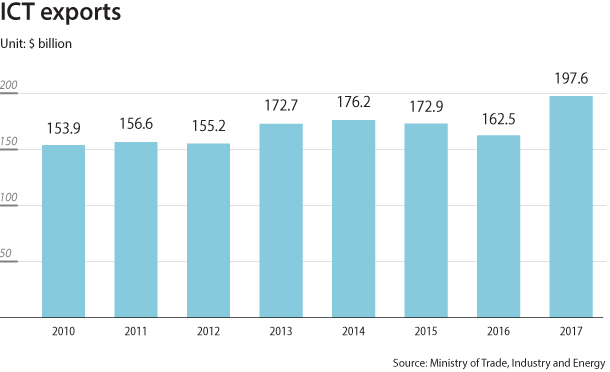 Korea’s exports of information and communication technology-related products reached a record high of $197.6 billion last year on the back of the superb performance of semiconductor companies coupled with strong global demand.

Imports of ICT products stood at $102.1 billion last year, translating into a surplus of $95.56 billion in the ICT industry, according to the Ministry of Trade, Industry and Energy on Tuesday.

Exports of ICT products shot up 21.6 percent from a year earlier, when Korea exported ICT goods worth $162.5 billion, a rally largely driven by strong export figures coming from the semiconductor industry.

As global demand for semiconductors continued to increase, exports of the chips reached as high as $99.68 billion, a 60.2 percent hike from 2016.

According to the government, it was the first time that a single item - semiconductor chips in this case - broke the $90 billion threshold in exports.

Display exports also increased last year on the back of solid global demand to $30.2 billion, a 7.8 percent jump from 2016.

China was the biggest importer of Korean ICT products last year, a testament to Korea’s influence in the industry as it emerged unscathed from Beijing’s economic retaliation last year in response to Seoul’s deployment of the U.S.-led Thaad antimissile system.

ICT exports to China, which includes figures for Hong Kong, increased by 22.2 percent in 2017 to $104.3 billion from the previous year’s $85.45 billion, the largest margin of increase ever for the Chinese market.

The trade surplus from ICT exports last year accounted for 99.7 percent of the total surplus of $95.77 billion, indicative of the country’s heavy reliance on the semiconductor industry.

Korea’s heavy reliance on the semiconductor industry could spell trouble down the road if the price of memory chips starts to decline in the second half of this year as Chinese chip makers, which have been gradually increasing their R&D investment, are expected to expand their production.

“With the growth of the IoT and AI industries, demand for semiconductor chips is expected to continue into the first half of next year,” said LG Economic Research Institute in its 2018 economy forecast, adding, “But the price of semiconductor chips could fall in the second half with Chinese chip makers expanding production capacity.”