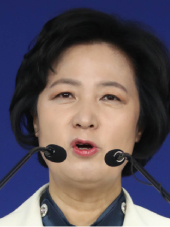 The leader of South Korea’s ruling Democratic Party on Tuesday voiced her willingness to play a mediating role that would allow ongoing inter-Korean talks to lead to dialogue between the United States and North Korea.

During her New Year’s press conference, Choo Mi-ae also expressed hopes that next month’s PyeongChang Winter Olympics, which Pyongyang will participate in, could help usher in an “era of new detente” on the Korean Peninsula.

“Should North Korea make a decision for peace and coexistence, the Moon Jae-in government and Democratic Party would actively respond to that,” she said. “[We] declare our will to actively mediate to enable inter-Korean talks to lead to dialogue between the North and the U.S.”

Her remarks came as the two Koreas resumed dialogue last week to discuss Pyongyang’s participation in the Olympics, which are slated to take place from Feb. 9-25.

The first talks in two years have raised hopes for improvement in cross-border ties. But conservatives see them with suspicion, raising the possibility that the North may try to use the talks to weaken the momentum of global sanctions and drive a wedge between Seoul and Washington.

Calling the North’s nuclear weapons program a “Cold War-era legacy,” Choo urged Pyongyang to come out for talks to discuss ways to establish a lasting peace on the peninsula.

“Even today, some opposition parties are sticking to their irresponsible hard-line stance and calling for the redeployment of [U.S.] tactical nuclear weapons,” Choo said.

“I strongly urge the opposition parties to cooperate with the Moon government’s policy for peace, which has garnered support from the international community,” she added.

During the press conference, Choo also reiterated her party’s commitment to sweeping reforms aimed at redressing corruption, power abuses and other irregularities in the country.

“We will carry out the public mandate that citizens have bestowed upon us, by carrying out much bolder reforms,” she said.